IT may come as a surprise to many but the Savage name is synonymous with the beginning of boat building in Australia. Building the first Savage way back before the turn of the 20th century and being one of the very first Australian companies to start wielding aluminium hulls, the compony has an impressive history. The manufacturing now takes place in Queensland instead of Melbourne and many things have changed over the years, but one thing remains the same, Savage still produce good old fashioned affordable boats.

Brand new to the Savage range of boats is the Osprey. Initial release is a 4.25 and 4.45 open hull, tiller steer tinny. The Osprey can be optioned up into a killer inshore fishing machine or kept as a bare boned workhorse.

The hull is a standard V nose tinny that has been strengthened with additional ribbing but build as a no thrills, pressed aluminium hull. Transom, sides and bottom are all 3mm which brings the hull only in at under 200kgs. Ideal for even a small family car to tow as even loaded and fuelled, the entire weight of the boat will be under 500kg.

But of course, manufactures like Savage understand that some of us like to customise our toys and this is where the Osprey can transform from a bare tinny to a sexy fishing machine.

The front casting deck is standard but the option is there to have a full timber floor. Side console, full length rails, paint or even a full wrap with graphics is an option that will transform the Osprey from a standard tinny. I would have liked to see a thruster plate as an option so that a bow mounted electric motor could be added but that is an easy fix.

The test boat was the basic setup with the standard front casting deck and a glove box as the only extra. When first stepping into the Osprey, the high gunwales and high casting deck make the hull look a lot bigger than it is. Walking onto the casting deck it felt very stable in the calmness of the harbour and when walking to the edges it maintained that stability. This is a very light hull with a beam of just under two metres so I was pleasantly surprised with the stability.

I was impressed with the amount of storage under the casting deck. With the deck being so high, storage underneath was massive and when you add side pockets and the huge anchor well, the storage is excellent for a boat of this size.

The anchor well has been made a lot larger than you’d expect on a tinny of this size. When talking to the team at Savage, they commented that there has been a lot of feedback in relation to making the anchor wells larger so they have obliged. I must say that there I nothing worse than having a decent sized anchor that does not fit in the anchor well.

The test hull was fitted with a 50hp four-stroke Mercury tiller steer outboard. With such a light hull, the 50hp launched the Osprey and powered it along at a very respectable 37knots. The new tiller arms on these outboards are massive. While they look very cumbersome, the functionality of the outboard is excellent and the big tiller arm makes the steering very light.

The ride quality was what you’d expect from a light tinny. That familiar sound of the hull skipping over the surface of the water, barely touching down, reminds me so much of my youth. But that is exactly what these hulls are all about. Most keen boaties start with an old tinny and move onto a new one. They then go bigger and might even get into plate alloy hulls. But we all start with getting familiar with the sound of a tin skipping across the water.

The fishability of the Osprey is limited somewhat by its design and options. Keen tournament anglers will be looking for lower sides and bow mounted electric options. But the Osprey is all about bait fishing, crabbing and just getting out on the water. Drop the anchor, put some baits out and start recycling some more cans for your next boat. 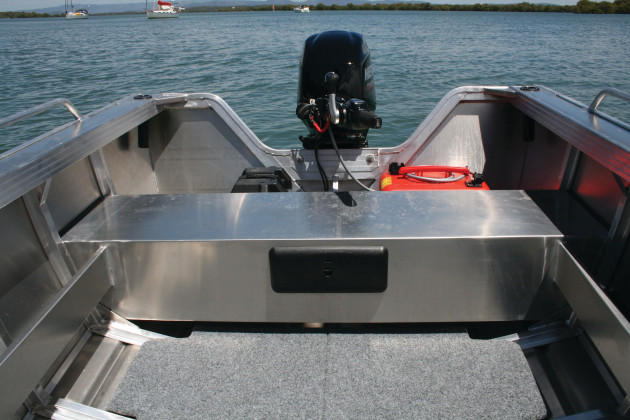 Most anglers looking at the Osprey will see it as just that. Something to get onto the water with, do some exploring and getting the family away from the Play Station. There's plenty of room to set up some electronics such as GPS and sonar so there are plenty of options to customise the hull to the owner’s needs. The price was being negotiated at the time of the review however, like all Savage boats, the price is always one of the positives.