I DON'T want to get into a discussion about great cricketing allrounders but anyone who ever watched Andrew Simons play one day cricket for Australia would agree he was one of the great all-rounders. With the bat in hand, he was brutal, with ball in hand, he was unpredictable and, in the field, he was like a cattle dog rounding up sheep. What was he best at? In my opinion, nothing. He was just at home no matter what he was doing and you wouldn’t hesitate on picking him first for any form of cricket.

It’s a huge call but that is how I rate the 6200 Rear Console from Yellowfin. It’s big enough to work the close reefs and bays but is just at home in the rivers, lakes and estuaries.

The hull design has been developed on the crocodile infested creeks and rivers of the Northern Territory. Guides love this style of hull so that they can sit and operate the boat from the transom while keeping a close eye on what is happening on the deck and bow. With Bluetooth electric motors being so common now, it is even easier to control the clients fishing experience without moving away from the helm or taking your eyes off the sounder. The design works just as well down south. Snapper fishing the bay can be done from either the casting platform, the rear bait-board or the deck and flicking small plastics for bream in the cold rivers of Tasmania will not be an issue either. And if it happens to blow up while you are out, the smooth ride of a plate boat with the seating on the transom is hard to beat. Perhaps a heated cabin for fishing the Derwent would be nice for a Queenslander like myself but apart from that, the 6200 Rear Console is hard to beat. 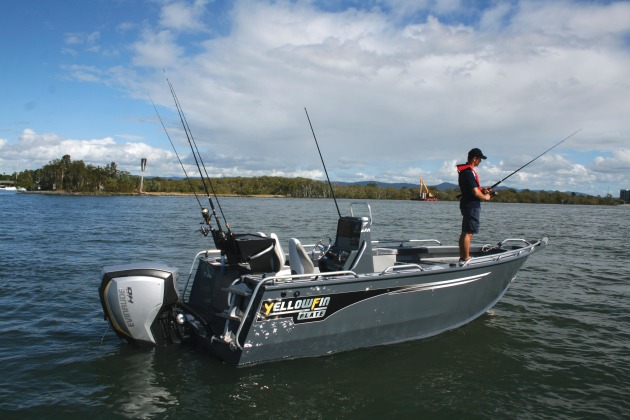 The day of the review had a reasonable chop due to a still southeaster blowing down the estuary and the Yellowfin chew it up. The configuration is rear centre console. This allows three seats on transom and a wide open deck for plenty of fishing space. The side seats can be removed to allow more access to the transom and the bait board. A handy option if cubing up burley for snapper or mackerel. The helm starts with very comfortable seating which Yellowfin are becoming renowned for. The console is big enough to flush mount all the electronics. The test boat was fitted with a 12” Lowrance GPS/sounder, a comprehensive switch panel, trim tab controls and the Evinrude digital display panel. There us a little bit of lipped storage on top if the console along with some space for the GPS aerial. There are three grab rails and the control box is mounted horizontally but works extremely well. This is all finished off very nicely with a chrome spoked steering wheel and added storage under the console. The deck is solid checker plate so tough as guts and easy to clean. The front casting deck has a ton of storage under floor and big enough to fish two big blokes in comfort. The 4600 can be optioned with a thrust plate so a bow mounted electric motor can be fitted and there is more than enough room for two or three batteries under the bow. With the size and plate build of the Yellowfin, it's unlikely that this will have an effect on the ride. The Yellowfin range has a load of options to customise the hull. Bait board, berley bucket and deck wash for the offshore angler and thruster plate with handwash and LED kit for the estuary and bay angler. There's also the option if a Platinum Pack which incorporatesall the most popular options in one package. The plate hull is built tough with 6mm thick vertical stringers and 5mm horizontal ribs. This is boxed in with the checker plate floor and a solid 6mm bottom and 19 degree variable deadrise.

Performance
There is no question that this hull is more than capable of handling the rough stuff. The sides are 4mm plate and ends up pushing the Yellowfin hull to 900kgs. Add a motor, fuel and two anglers and the overall weight is more like 1500kgs so there is a lot of weight to smooth out that ride. The beam is 2,4m and length is just under 6.2m. The test boat was fitted with a 150hp Evinrude E-Tec HO. This made the hull launch like a formula one car off the grid and allowed the hull to cruise along at 37 knots at full throttle and just under 32 knots at 4200revs. Maximum power is 175 ponies so there is still a little wriggle room for these that need more grunt. Putting the Yellowfin in reverse didn’t sink the transom as it tends to do in some rear console hulls and there was no problem with cornering and trims out very well. The test boat was fitted with trim tabs so this was not an accurate review of how well the standard hull trims out. Overall, the Yellowfin performed every bit as well as it looked. 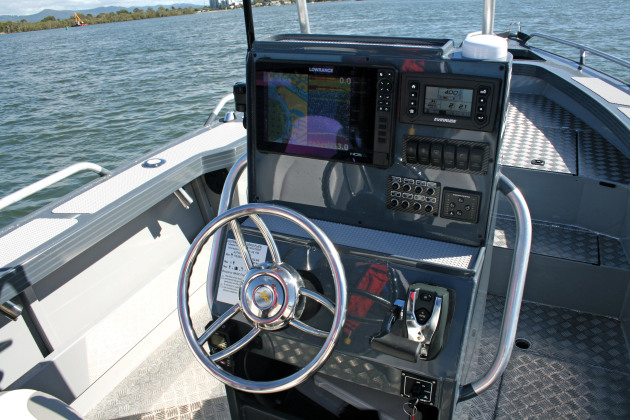 Fishability
The heavy hull, wide beam and low centre of gravity all add up to a nice stable fishing platform. There is a heap of room in this boat so everything from casting big metal slugs to working a tiny fly can bedone with ease. Customising the setup will allow for everything from bay and reef to freshwater lakes and dams. It is a trueallrounder. The transom is extremely well laid out with a very functional bait board that was obviously designed by fishos. The rear seating can be swung around to make drifting pillies down a burley trail as comfortable as watching the footy in the armchair at home. Setting the bow up with an electric motor would make this the ideal sportfishing hull. So many anglers are jigging offshore with long shaft electric motors these days and this would be the ideal hull to do this in. Equally, chasing barra in the wild rivers of Northern Australia would be made easy in the Yellowfin. There wouldn’t be a problem with four blokes up front casting lures at drains and rock bars. Might be a few arguments over who gets the first cast at a snag but that comes down to owner’s privilege in my boat.