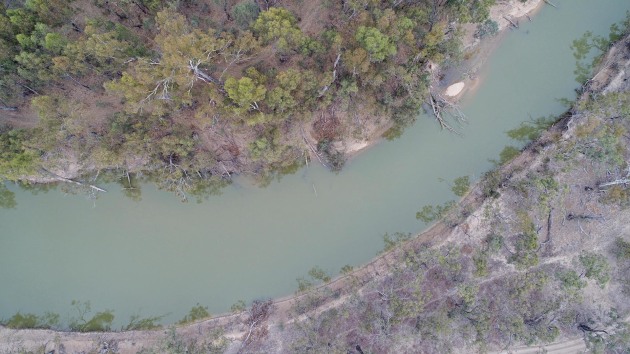 One of the many great things about the Riverina is the fishing. At the risk of attracting too many people to the region, I’d like to tell you a bit about what the area can offer an angler.

Where?
The boundaries of the Riverina are inexact and open to interpretation. I think of the Riverina as the country between the Murray River in the south and the Murrumbidgee River in the north, and stretching from Swan Hill in the west to Wagga Wagga in the east. This expansive area encompasses an array of great fishing waterways with the major ones being the Edward, Murrumbidgee, Niemur and Wakool Rivers, along with the smaller Billabong and Barbers Creeks.

The rivers
For the most part, the meandering, muddy-green rivers of the Riverina carve steep-sided banks across vast grey soil flood plains. Their deep beds are punctuated by shallower areas and sand bars on the insides of the tighter bends. And, almost always, they wend their way between the pale trunks of towering red gums or the shorter, often stunted, grey box trees. This is relevant to anglers because these trees ultimately drop limbs or are prised from their tenuous grip in the bank by the relentless current. When such timber crashes into the water, it forms crucial cover and habitat for native species: the so-called “snags” that are also so important for the anglers who seek these species.

The rivers of the Riverina form the southern reaches of the Murray-Darling Basin, flowing west to converge into the Murray River, which ultimately passes through South Australia and into the ocean via Lake Alexandrina. The flow and depth of the water in these Riverina rivers is highly variable due to a combination of natural factors and the presence of many weirs and lochs that allow authorities to regulate the flow to suit the needs of irrigated agriculture and other demands. One day the water could be running a banker, then the next time you’re there it could be nearly low enough to walk across. 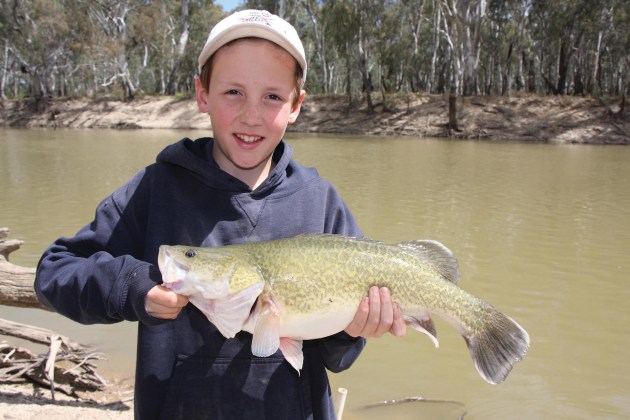 Species
The rivers of the Riverina contain two main native species of interest to anglers. The most revered, of course, is the Murray cod, but a close second is the golden perch, also known in these parts as the yellowbelly. Between them, these two must surely be the focus of 98%, or even more, of the total fishing effort in the Riverina. Both species are ideal sportfish, keen as they are to take both bait and lures, and both are stocked into many waterways in the Riverina to supplement natural recruitment.

In addition to cod and goldens, another native species likely to be encountered is the silver perch, which is protected but surprisingly common. 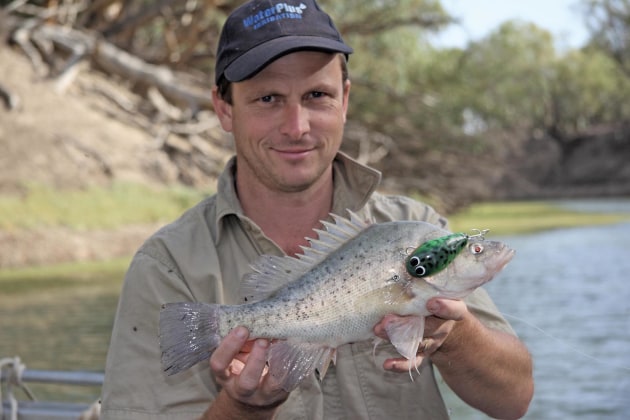 In terms of introduced species, by far the most common, unfortunately, is the European carp. Sometimes these invasive fish are all you can catch in certain parts of the Riverina, though they are less of a feature in anglers’ bags than they once were. When I was a kid, for instance, carp were common but to catch a native species by rod and reel was a rarity. Then, for a while, it was the other way around…and still is in some places. Catching carp can be better than catching nothing, but our rivers would be much better off without them.

Lastly, there are occasional redfin. I’ve read that redfin were once an exceedingly common capture in the rivers of the Riverina but these days they are more of a curious bycatch.

When?
One factor to consider when planning a fishing trip to the Riverina is that the season for Murray cod is closed between the end of August and the start of December. This not only means that you may not take them but you may not deliberately fish for them, either. You can still target golden perch during this spring period, though, and the fishing can be very good.
I have found summer to be a productive time to fish in the Riverina, but a much more accomplished cod fisher than me, friend and former boss Stephen Booth, says that in summer the water temperature can be too hot, resulting in shorter bite windows. Boothy nominates from late March to May, when the water temperature is falling, as the prime time for native species. The caveat is, according to Steve, that smaller fish will shut down once the water temperature reaches 14 degrees. Once the water really cools, you will catch fewer cod but they’ll be big! 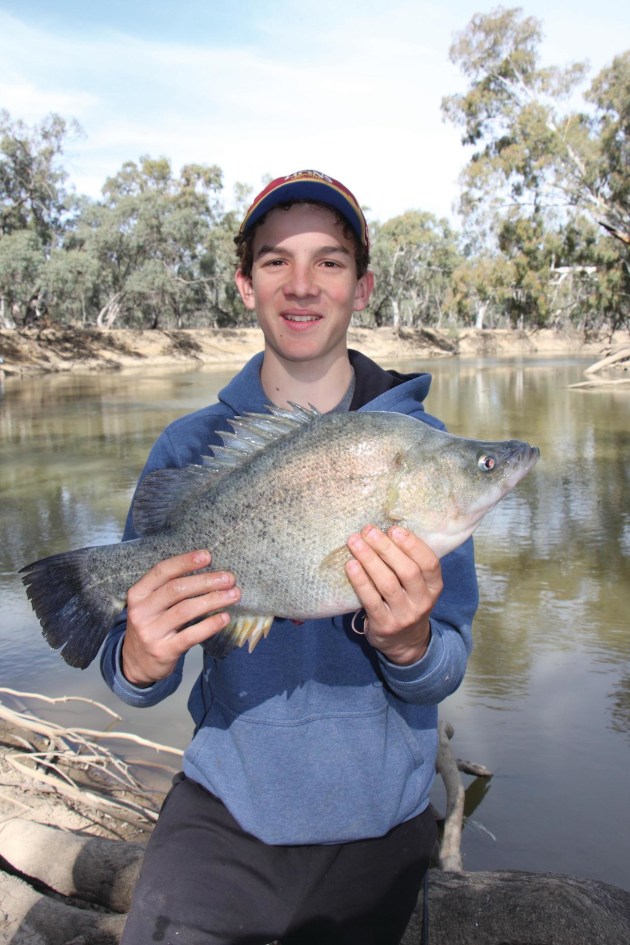 With regards to atmospheric pressure, Boothy believes that a moving barometer is best. It doesn’t matter which way it is moving – up or down – but the faster the move the better.

Boat or bank?
A boat opens up the very best fishing that the Riverina has to offer. A small tinny or kayak allows anglers to get close to the snags where most fish reside. If you anchor or tie up a short distance upstream of a snag, you can drift or cast your offering back into the timber and right into the strike zone.

If you don’t have a boat, catching good fish from the bank is still entirely possible. There are countless snags lining the banks that can be cast to from the shore. You’ll almost certainly lose more gear, but I have made many memorable captures from dry land.

No matter whether you fish from boat or bank, the key is to fish in amongst the fallen timber. As frustrating as it is, if you’re not getting snagged every now and then, you’re not in the right spot.

Bait is great!
Bait fishing still rules the Riverina. It is the simplest form of fishing and is highly effective, but it needs to be done right to reap rewards.

I have experimented with braid and gelspun lines when bait fishing but ultimately reverted to using monofilament. I favour a running sinker rig with a light sinker stopped about 75 cm above a size 3/0 hook in a suicide pattern or similar. Others prefer to run the sinker all the way to the hook.

When it comes to bait it is wise to think ahead. One of the best baits here is the humble earthworm but the rivers of the Riverina are set amongst dry terrain and finding them locally can be impossible. Bringing your own supply or buying them from a local store is well worth the trouble and expense.

Other great baits include freshwater shrimps and yabbies. You’ll have no trouble gathering these locally from either the rivers or from local dams (check local regulations first). For me, the top bait in Riverina waters is an earthworm and shrimp on the same hook, the so-called “cocktail”. 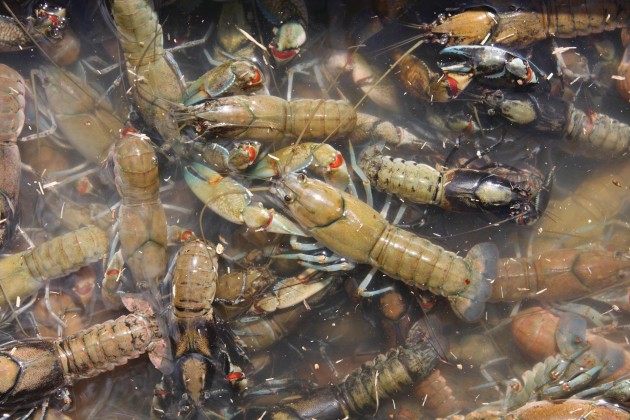 A close second in terms of productive baits is the bardi grub. Again, these can be captured locally by scraping away the leaf litter beneath red gums to expose their holes, then extracting them with an appropriate grub wire.

Lastly, there is cheese, a great stand-in bait for when more natural presentations are hard to come by. I don’t know why it works, it just does, so when I’m fishing in the Riverina I always have a pack of cheese cubes in my car fridge.

The lure of lures
Lure fishing for native species has become very popular in the Riverina over the last 10 or 15 years. When I was a kid it was almost unheard of for anyone to fish with lures. Today it is commonplace and some anglers refuse to use anything else.

I’m a big fan of spinnerbaits because you can let them sink down into the timber then work them slowly back out, so that they spend a long time fluttering tantalisingly in the strike zone. With hooks that turn upwards as they are retrieved, they are also resistant to snagging.

Hard-bodied lures have their place, too, particularly those with an aggressive bib that gets the lure down to depth quickly. When using hard-bodies it often pays to cast beyond the target snag so they are at the correct depth by the time they pass the timber. 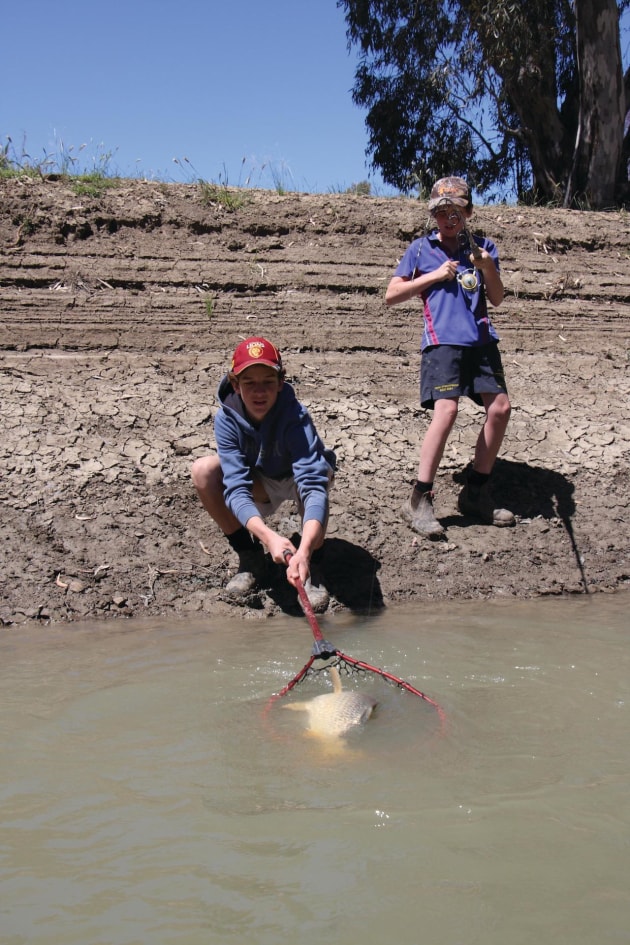 Trolling is also very successful in the Riverina. Remember to motor as slowly as possible and to hug the bank on the deep side of the river. It’s best to use diving lures that float when the forward propulsion is stopped, so that when you start hitting timber you can drop your rod back and float the lure over the snag.

Surface lures and sinking vibes can also be successful in the Riverina, but they require more sophisticated presentations.

Access
Most of the frontage to Riverina rivers lies in private hands, so it’s an advantage to have a good relationship with a local farmer. Failing that, the rivers of the Riverina have plenty of public access points. With a bit of research, it shouldn’t be too hard to find your way to the water.

So, what are you waiting for? If you’re looking for a fish-filled holiday in a scenic, accessible part of our wide brown land, the Riverina has you covered.

Did you know?
Studies of the chemistry of fish ear bones (otiliths) show that most (up to 80%) golden perch in the Riverina were spawned in the Darling River upstream of Menindee Lakes. After spawning, larvae and early juveniles drift downstream to the Menindee Lakes and other ephemeral floodplain nursery habitat that provides shelter and food. At approximately 12 months old, the juvenile perch migrate back into river channels from where they disperse far and wide including into Victorian and NSW tributaries. Adult golden perch, in turn, are highly responsive to river flow pulses and run hundreds of kilometres upstream to spawn. Thus, anything that interferes with the connectivity of the Darling River to the rivers downstream is likely to compromise golden perch recruitment in the lower Murray Darling Basin