THE Solomon Islands or "Sols" is an island nation consisting of six main islands with many other smaller islands. It's located to the east of Papua New Guinea.

The Sols is well known for its WWII history and world class diving. But in recent years – and for good reason – the Sols has captured the attention of fishos and surfers.

After confirming my upcoming visit to the Sols I quickly got to researching the plethora of fishing opportunities. I was salivating at the prospect of casting topwater lures around the productive reef systems for big Spanish mackerel and trekking the freshwater streams for spot tail bass.

I was well prepared for this trip, already owning what others before me had advised to take and use, which largely consisted of medium to large topwater stickbaits and poppers and some lighter stuff for the smaller demersal species. Naturally, I also took a couple of baitcaster outfits and some shallow diving jerkbaits for the elusive spot tail bass.

Arriving in the Solomons
Flying out of Brisbane, my first glimpse of the Sols came just before touching down in Munda, New Georgia island. The islands in the Sols are lush and green, creating a vibrant sight from above. On the boat ride from Munda airport to the idyllically positioned Zipolo Habu resort, I saw the amazing array of small islands that Vona Vona Lagoon is famous for.

Shortly after arriving at the resort, gear was unpacked and plans were made to explore some close-by channels and reef edges which looked incredibly fishy. I was to fish this area for three days before heading east to Santa Isabel and Papatura Islands.

Fishing the Western Province
The inshore waters of Vona Vona Lagoon consists largely of scattered reef among hundreds of tiny islands with narrow channels of varying depths. Medium size stickbaits and poppers worked well in the lagoon. There were plenty of airborne Spanish mackerel strikes to keep you casting along with coral trout, red bass, bluefin trevally and the odd small GT. Once the topwater bite from bigger fish slowed, it was time to cast lighter hard body divers and plastics for smaller demersal species on the lagoon flats and bommies - to me, it's this kind of non-stop fishing action that is the motivation to fish a remote location like the Sols.

Tackle was stepped up a notch while casting along the barrier reefs of the western side of Vona Vona Island and also around Rendova Island. These places are likely looking GT spots and can be, at times, quite "sharky". I was fishing with heavier PE6-8 tackle and large stickbaits. While the GTs were quiet when I was there, they do get some respectable size models at times. Nonetheless, the topwater Spanish mackerel action is as good as anywhere in the world and when big Spanish are clearing the water by 10 metres to crunch your stickbait who cares about trevally!

It's also worth mentioning that the offshore FADs off Vona Vona, New Georgia and Rendova hold mahi mahi and yellowfin tuna of varying sizes - up to 50kg+. The FADs here are deployed by commercial boats fishing for tuna and local guide Taska informed me that success on the FADs can often depend on how recently the commercial vessels have swept through the area.

Also very interesting, is nearby Skull and Kennedy Islands. Skull Island is accessed by a short boat ride from Zipolo Habu and is accessible to tourists - giving you a chance to visit the resting place of some of the areas chiefs, warriors and bygone head-hunters.

Kennedy Island is a small uninhabited island in the area named after John F. Kennedy, notable for its role in the story of PT-109, part of the Pacific Ocean theater of World War II. 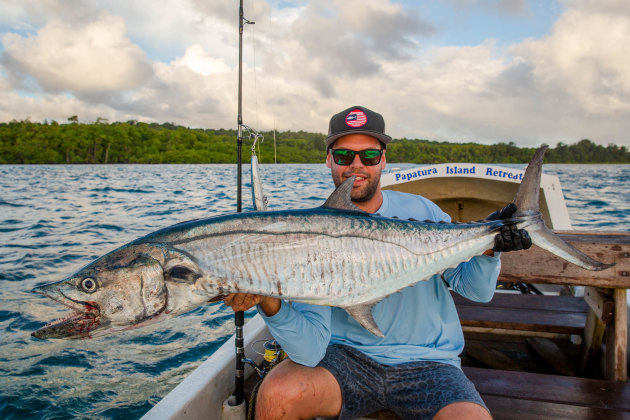 Fishing Isabel Province
Similarly, the same bluewater casting action can be expected over on the eastern side of the Solomon archipelago at Papatura Island, Isabel Province. This area is accessed by a quick charter flight from Honiara to Suavano. The resort at Papatura Island has to be seen to be believed. I discovered - for good reason - it's quite the secret getaway destination.

Papatura is well known for its surf breaks, but also offers endless fishing opportunities from deepwater jigging for dogtooth tuna to casting jerkbaits along freshwater streams for spot tail bass.

There’s also plenty of big Spanish mackerel on offer at Papatura along with plentiful stocks of red bass, different types of trevally, sailfish and a sprinkling of big GTs among other things.

I was particularly interested in catching my first spot tail bass and after having a quick chat to Fishing World contributor Benny Job on his recent success chasing spot tail in the Sols, I was confident I could get the job done. What I didn't realise before the trip was just how rain affected these tight freshwater streams can be, and being caught off-guard by surging freshwater rivers is no joke!

Luckily for me, the rain squalls had eased during my stay on Papatura Island and I was able to give my casting arms a rest from the heavy topwater tackle and hit the jungle in search for a spot tail. 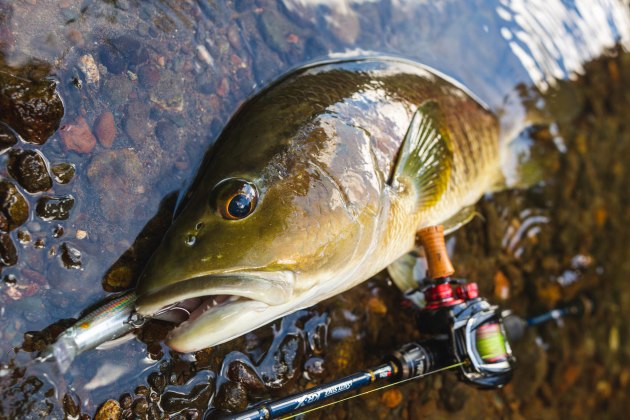 Spot tail are a striking fish in appearance with gold/green colouration, faint vertical stripes and a large dark spot just before their tail wrist. Like most well known lutjanids  or "snappers", spot tail, have an impressive dental display and require the angler to pay particular attention to the tackle required to catch them - strong line, lures and hooks
are advisable!

Spot tail are most commonly encountered in the rivers of Papua New Guinea, usually by anglers chasing the revered black bass. However, spot tail are also quite common in the brackish and freshwater reaches of many small river systems in the Solomon Islands (some of which can also hold black bass). Not a great deal is known about spot tail bass in the Solomons, but it is thought they prefer the fast flowing freshwater reaches and pools found upstream of the tidal flow.

Strangely, spot tail bass are very popular in Australia despite them never being encountered in Australian waters. However, the hard fighting nature of spot tail combined with the impressive locations they inhabit is a winning sportfishing recipe - an irresistible temptation for many keen Australian anglers like myself.

I was fishing the Fufuwana River a short boat ride from Papatura Island retreat. Not being the first to fish here, I had a fair idea of what to expect, but casting to these big, powerful fish in tight, clear waters surrounded by dense rainforest is an experience undoubtedly hard to convey adequately. Your casting must be on-point and your tackle and reflexes up to scratch to wrestle one of these fish out of heavy cover.

I packed light and took a handful of shallow diving jerkbaits and some softplastics specifically for the spot tail. The local guides, Eric and Rolly, informed me they feed mostly on baitfish (largely mullet), prawns and crabs. I was using the new Abu Garcia MGXtreme baitcaster paired to an Abu Garcia Salty Stage KR-X 4-8kg baitcaster rod. This combo is extremely light (yet packs a punch) and enables you to cast all day with pin point accuracy.

From my experience, every likely looking spot must be peppered with casts at least a few times. My best fish came after upwards of 10 casts casts along the same thick overhanging foliage. Spot tail hit hard and quickly head for cover so a heavy hook set and drag is required to wrestle them out. I was using PE3 on the MGX and running 40lb leader. In hindsight, I would take two outfits, one with 20-30lb leader for a more finesse presentation when sightcasting to the odd fish roaming out in the open and the other outfit with heavier 40-50lb leader to work the snags and log jams. The lighter outfit could also be used to have some fun on the local jungle perch and mangrove jack, which are plentiful.

Trudging for kilometres through the jungle with a bush knife isn't everyone's cup of tea, but chasing spot tail bass in the Sols was right up there as one of the most enjoyable fishing experiences I've ever had and one I will never forget. The fishing reminded me of skinny water bass/JP fishing back in Australia, but only supercharged! The heat and humidity is intense, the rainforest is unbelievably thick and the fish get big!

After my visit to the Sols, I'm a firm believer that its popularity will only grow. The combination of world class bluewater and sweetwater fishing is a winning formula. Add to this an incredibly accommodating culture, rich history and an idyllic tropical atmosphere - guaranteed to offer-up something for everyone!