ON the weekend of February 7 and 8, the sleepy village of Bemm River in the East Gippsland region of Victoria saw 86 kayak anglers compete in the opening tournament of the 2015 Hobie Kayak Bream Series presented by Daiwa.

53 Victorians, 30 New South Welshmen, and three entrants from the ACT took an excellent haul of fish over the two days with 407 legal size bream brought to the scales, weighing a total of 277.96 kg. Bemm River, a favourite bream fishery amongst Hobie anglers had kept its superb reputation in tack.

Competing anglers set out chasing bream with a bag limit of three legal fish per day. They pedalled off from the Power-Pole starting line in excellent conditions on both days. As the sessions came to a close anglers threw their final casts around the Atomic Launch Site before returning their keytags and placing their day's bag in the Berkley Bump Tub prior to the live weigh-in.

At the completion of the day one weigh-in, Chris Burbidge from Victoria was the TT Lures Leader of the Day with a three bream, 3kg bag. He was closely followed by the 2.94kg bag of Daniel Brady from Victoria. Josh Smith also from Victoria had a 2.67kg bag which placed him in third with one day to go in the event. On day 2 as the wind blew up and peaked at around 25kph on the Austackle Arena, all anglers returned safely back at the event site and an impressive number of bags were placed on the scales for the day two Strike Pro Weigh-in. 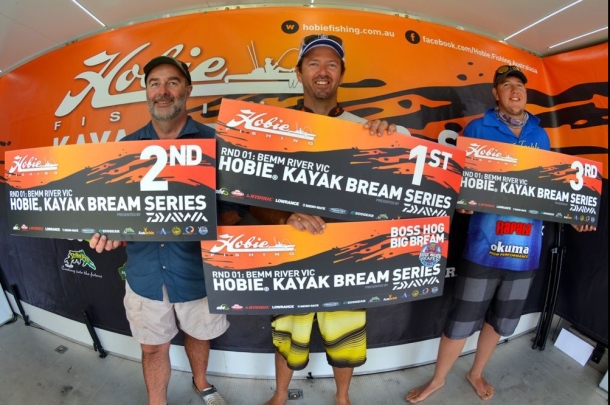 Round two of the series, which will be held at Marlo in Victoria over the February 21-22 weekend with more spots in the Australian Championship up for grabs.

Full report of Round 1 at: www.hobiefishing.com.au