AN investigative report by Graham Lloyd in The Australian has today revealed that the Gladstone Port Corporation covered up evidence that toxic algal blooms may have contributed to outbreaks of disease in fish, and death of seagrass, dugongs, dolphins and turtles in Gladstone Harbour. (See earlier related stories here and here.)

The Gladstone Ports Corporation (GPC) is a Queensland Government controlled authority in charge of the controversial port expansion and dredging projects in Gladstone Harbour, which are being conducted for Queensland's booming liquified natural gas industry. Lloyd’s article revealed that the GPC had known for over two years about a university report which highlighted an algal bloom and increased sediment from its infrastructure works, but only in recent weeks has it made the reports publicly available.

The GPC still believe that “heavy flooding” was the primary cause of the outbreak of fish disease in a period starting mid/late 2011 and extending into 2012, citing the outcomes of a review of the situation which was conducted in 2012 by a government selected scientific panel. However, the scientific panel was not provided with the just-released 2011 report, which was produced for the GPC by researchers from the Central Queensland University. The university report says harmful algal blooms may have been a contributing factor in the fish disease syndrome.

Independent investigations by fish veterinarian Matt Landos in early 2012 found that the cause of disease in barramundi, sharks, queenfish and other species of fish and shellfish in Gladstone Harbour at that time was highly unlikely to be caused by river flow events that had occurred in the region 12 months earlier. Instead, analysis of samples taken by Dr Landos suggested that other factors, including exposure to sediment, metals and toxic algae, may have been implicated in the disease outbreak. Dr Landos noted that all of these potential causes could be linked to plumes of poor quality turbid water originating from port development works which included Australia's largest ever dredging project.

Satellite pictures taken in July 2011, several months after the river flow events, which were later published in The Courier Mail, clearly show that water in some parts of Gladstone Harbour had returned to its natural winter clarity by that time. In contrast, the area around the port development was markedly turbid, particularly in the vicinity of a rock bund wall.

The GPC has previously received flack for suppressing internal reports that showed a rock bund wall built to retain dredged sediment had leaked badly during mid-late 2011, a period of time when water quality and fish health was at its worst. The satellite photos obtained by Fisho also show dredges working in the area of the bund wall, apparently debunking claims made by GPC in The Australian article that dredging had not commenced by August 2013. The University researcher responsible for the report, Associate Professor Larelle Fabbro, told The Australian it was a condition of her research that she not make any public comment.

Independent veterinarian Matt Landos, said the newly published material was significant and should have been made available to the government selected scientific panel when they were investigating the fish disease outbreak in 2012. “Scientists can only work with the data which is provided to them," Dr Landos observed.

Dr Landos continued, "The full data now seriously contradicts the conclusions of the State and Commonwealth that floods were to blame. Given the serious nature of the new information that is now in the public realm, another independent review of the science around causes of the Gladstone ecosystem crisis seems warranted”. 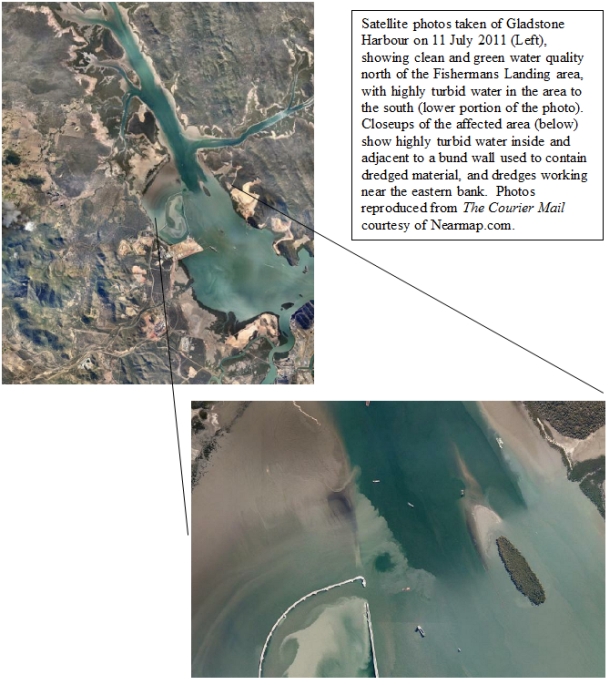