WE had some great weather in May with a few breezy days also in between, overall it was a great month with some opportunities to head wide and target reef species.

The longtail were still around in good numbers through May, but have begun to feed deeper in the water column as the bigger bait has moved in. Working stick baits around the birds got some good results along with the trusty bubblegum Z-Man StreakZ.

Mac tuna, school and spanish mackerel were also present through May mostly hanging on the reefs working bait deep in the water column.

Trevally such as golden and tea leaf have been on the reefs throughout the bay and are always fun on light spin tackle. Along with the trevally, we came across a few schools of queenfish which can be seen milling on the surface at times. The queenies love a pencil popper with some great aerial strikes as they chase them down on the surface. 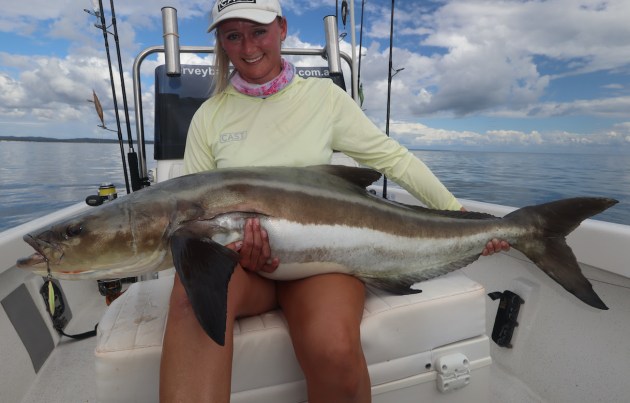 We also found some enormous cobia that provided seriously brutal battles between angler and fish. The cobia were mostly feeding on sand crabs, which made them a little tough to get a bite out of at times. But when they did, we certainly knew about it!

On the wider reefs, species such as sweetlip, coral trout, cod, moses perch and more were taking offerings such as Zerek prawns, jigs and soft plastics and were a welcome addition to the esky.

Snapper season is almost here! Just weeks away until we see a few move in. So far we have only seen smaller models with the bigger spawning fish due soon.

We still have availability this season if you are after some fun targeting snapper along with our other great winter species, be in touch for rates and dates.