BLUE Rock Lake, north east of Melbourne was the arena last weekend for round 2 of the 2015 Hobie B.A.S.S. Australia Nation Kayak Series.

Blue Rock Lake is a thriving bass impoundment, loaded with structure and snags and has a 9.9hp engine limit keeping boat traffic to a minimum. The resulting lack of pressure on the system, paired with the stealth and maneuverability of kayak fishing, allows anglers to get right into the snags to find bass and makes the waterway a fantastic arena for the Victorian round of the series.

Anglers still had to work hard for their three bass limit in this Catch Photo Release (CPR) tournament, travelling long distances to find fish and many using heavier gear to avoid the common bust ups associated with fishing in such a snaggy structure.

23 competitors in total headed off from the Power-Pole start line in mild conditions that would continue throughout the day. Winds picked up to around 10 knots mid morning but didn’t seem to turn on the fish as the vast majority of bass caught were photographed before 10:30.

At the completion of scoring it was Joel Crosbie from Mirboo North in East Gippsland, Victoria that took the top prize with his three bass measuring 32cm, 36cm and 31cm for a total aggregate of 99cm. Fellow Victorian Ben Anderson placed second with his three bass for 90cm. Reece Simmonds, also from Victoria, came third with two bass for 70cm.

Crosbie and Anderson both secured themselves a place in the 2015 Hobie B.A.S.S. Australia Nation Kayak Series Australian Championship to be held at Hinze Dam, Queensland in October. This was the second Championship qualification in as many weeks for Crosbie after his back to back wins for bream and bass. 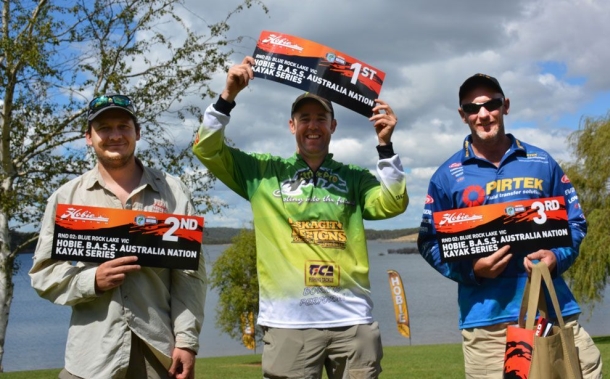