BACK in November '06 I was invited to join Fisho's David Green and a bunch of his mates for a week of impoundment barra fishing at Lake Awoonga, near Gladstone. For the trip we towed up a flotilla of boats from the Gold Coast and hired two houseboats at the lake to act as our home base for meals and accommodation.

We found the fishing at Awoonga tough during daylight hours and only hooked a few barra, despite long hours of casting and trolling. On previous trips, Greeny's group discovered the fish bit best late at night. This soon led to us doing long night shifts trolling lures until well up to crazy o'clock. 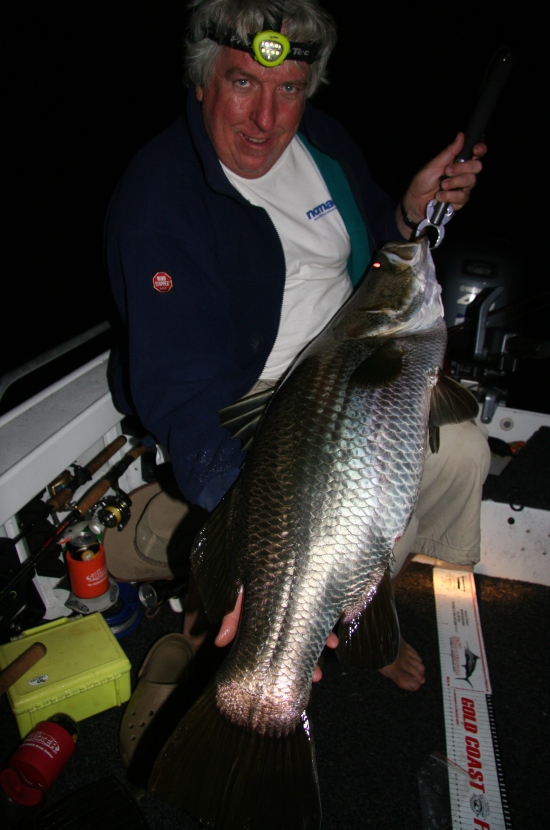 Night shift - David Green with a typical Awoonga barra from 2006.

One night is still fairly clearly etched in my mind. Greeny, Darren Clarke and I were slow trolling lures – gold and black Classic Barras, all – near to an island somewhere way out in the lake. The lights of other boats were dotted all around as we turned to make another pass after again encountering the weed beds that signalled the end of our run.

It was around 2.30am and enthusiasm was beginning to wane on board Greeny's Dead Fishy. We'd caught a fish earlier in the night but that felt like an age ago. A savage wrench on the rod quickly had me to my feet. A big fish broke the oily water and splashed loudly somewhere behind us in the dark. Braid line crackled from the Curado's spool and I seemed to recall Greeny calling the fish a “beast” as it powered off into the night. Wide awake from the adrenaline, I was struggling to stay with the barra. Another jump near the boat confirmed Greeny's call. Again the fish swam away strongly, taking all my hard earned line.

“Who said these things don't fight!”

After a few more minutes of tug of war we had the barra boatside.

I don't remember how we got it in the boat, but I do recall the Environet looked like a butterfly catcher next to it. Somehow we got it on board and I looked at it in disbelief as it gleamed under torch light. It measured 122cm and was as fat as butter. Unfortunately though, the fish was spent and despite our best efforts couldn't be released. It weighed 65lbs.

The last time I heard, a fibreglass cast of that barra was adorning the wall of a business somewhere on the Gold Coast. 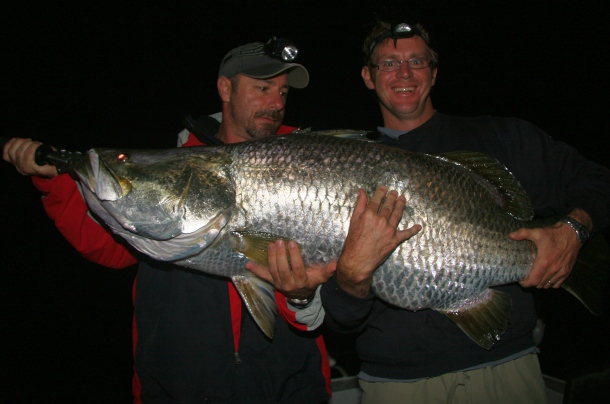