THIS season is becoming one of my best ever for big fish off Cairns.

We have just finished a charter with Henning Hassel and Nils Christian and we released some nice fish again. Day 1 we started our bait trolling at the Ribbon Reefs, but the fishing had shut down, so we moved south to St Crispins Reef, where Nils released a 900lb fish.

Once again just as the fat lady was about to exercise her tonsils, another big girl jumped all over a bait as if she had not eaten for a week, but this big girl had no surprises for us and after a short fight Nils released a 950lb fish.

Day 2 and we fished Linden Bank. Not to be outdone by the Commonwealth Bank, Linden Bank delivered a great dividend. Henning tamed a 900lb plus fish, and the celebrating had not yet finished, when another big girl jumped on the scaly mackerel bait on the left 'rigger. Nils jumped in the chair, and settled in for another fight; this big girl knew a couple of tricks which I had seen before, and before long we released another 900lb plus fish.

Nils hardly had time to vacate the chair when another fish crashed the tuna bait on the stinger ... this fish gave us some spectacular jumps and after some fabulous trace work at close quarters by the crew, this 600lb high jumper was released in mid air. 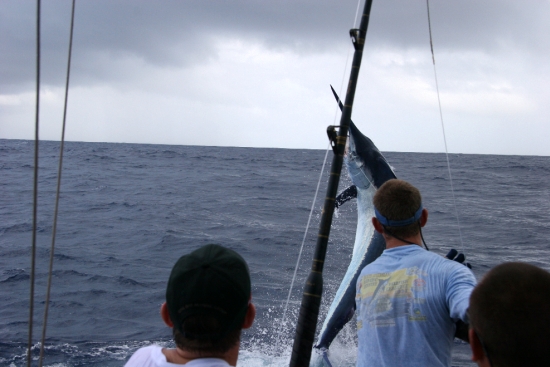 The remainder of the charter was fairly quiet compared to those two frantic days. Henning and Nils who have fished with me twice before, loved the experience again.

It has certainly been a wonderful season for big girls. All of my clients have seen what this place can produce, and if the big fish keep coming as they have been, it will certainly be a season to remember.