October and November are the prime months to catch the giant black marlin that attract anglers to this region from around the world. I'd read of Bagwah’s previous charter in 2011 on this site (see here) when he caught and released two granders (1000lb+ & 1200lb+) in one day and was hoping his good luck would continue for this trip.

We boarded Viking II at Cooktown - the port with closest access to the famous Ribbon Reefs and Lizard Island - at 7am on Day One and heard news of a grander and 800lb fish being released by a Tasmanian angler three days prior. 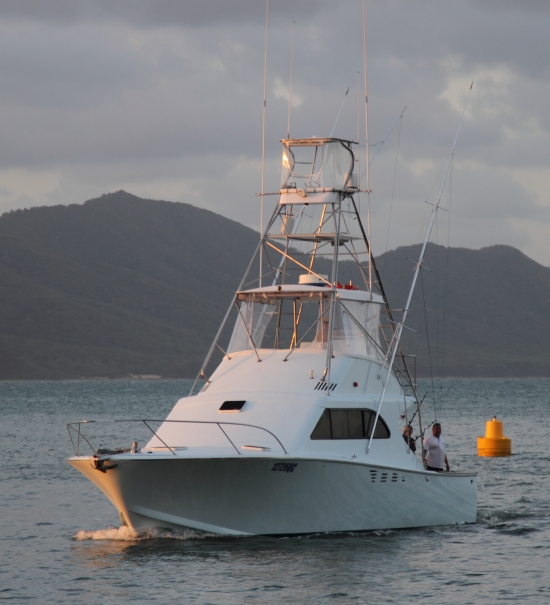 With expectations high we cruised east for 90 minutes and commenced catching bait on the inside edge of the reef. Catching bait consists of trolling Halco Laser Pros and Rapala Magnums or X-Raps for scaly and Spanish mackerel, macherel tuna, scad, yellowfin and longtail tuna (often 10kg+) on 10-15kg outfits. The baits are then rigged on 20/0 circle hooks as skip baits or swim baits. Many "first time" heavy tackle anglers cannot believe the size of the bait (which is often the largest fish they have caught) and the scale and weight of 60kg class tackle. 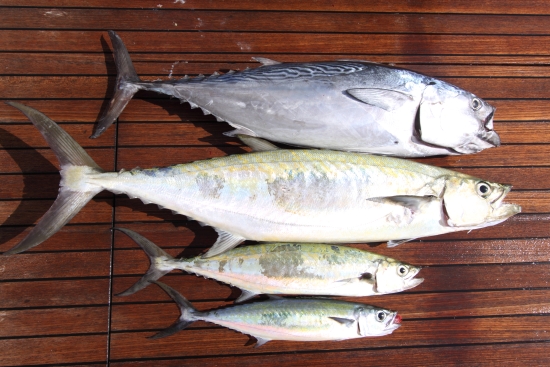 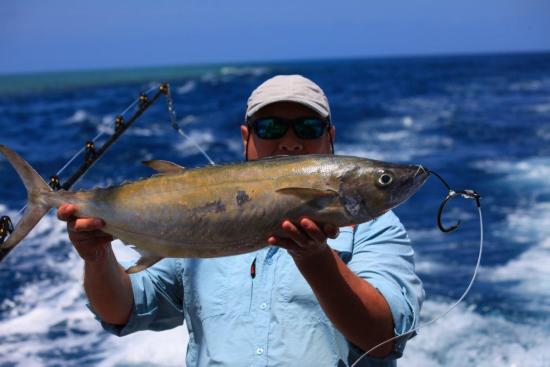 The Viking II heavy tackle consists of a trio of 130ST 2-Speed Penn International reels mounted on custom built Ian Miller 60kg class fully rollered bent butt chair rods. The reels are filled with 1000m of 60kg dacron top-shotted with 300m of 60kg (IGFA tested) monofilament line. Leader is 600lb mono (skip baits) or .40 diameter single strand wire (swim baits). This specialist tackle allows enormous pressure to be driven from the angler's legs; with up to 40kg of drag needed to subdue these fish that cannot be achieved with the stand-up tackle used for lighter line classes. Strike drag of 20kg is too high to allow line to be pulled of the reel by hand. 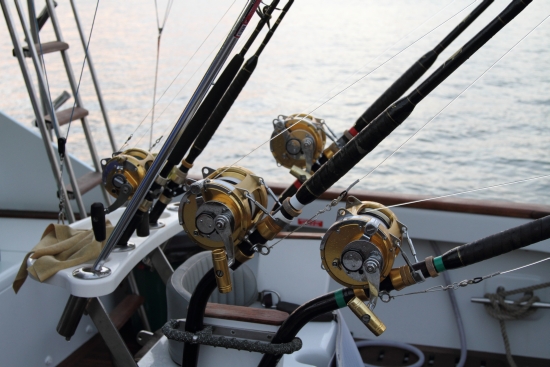 At 11am after a quick refresher course from crewman Westy on the use of 60kg chair tackle and with fridges full of expertly rigged baits, we headed east of Ribbon Reef No.5 (where the crew recently released a grander) to water over 1500m deep, less than 1km from the edge of the reef. Bill instructed his crew to troll large 11-12 inch lures as we travelled north in search of the cobalt blue warmer water preferred by our target species, Istiompax indica. 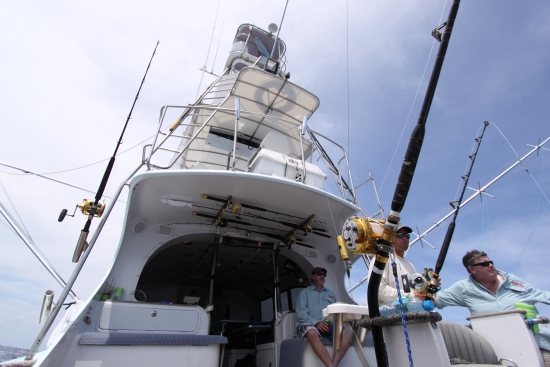 In the middle of Ribbon Reef No.10 Viking II slowed from 8 to 5 knots. A light breeze blew from the north east and the water had changed to a beautiful iridescent blue – perfect conditions. Billy moved into position at the top of the tower (to allow a birds-eye view of the bait and approaching fish that cannot be seen from the cockpit level) and Westy and Carl retrieved the lures and began to deploy the baits. Let the real fishing begin!

A skipping 8kg mackerel tuna was clipped into the left outrigger and a 5kg scaly mackerel deployed as a skip bait from the centre 'rigger furthest back past the prop wash in a "window" of clear blue water. Carl dropped the scad he had prepared as a swim bait in the water at the side of the boat and watched its tail beat in a life-like fashion as he hand lined it back to its predetermined position in the spread. The line was unexpectedly ripped from his hand before it could be secured to the release clip in the 'rigger. Billy screamed from the tower that a big fish had eaten the bait.

Like a well oiled machine the crew automatically switched into "fish on" mode, reeling in the other two baits and storing rods out of the way. The ratchet on the big Penn ticked over at a consistent but not overly fast rate. Bagwah took his position in the chair as Carl moved the rod into the chair gimbal and clipped the seat harness onto the lugs on the reel – ready for battle! Billy gave the call to increase the drag slowly as the fish was swimming away, which allows the circle hook to slip up from the fish’s gut and find its mark in the corner of the jaw, allowing it to be released with minimal impact. 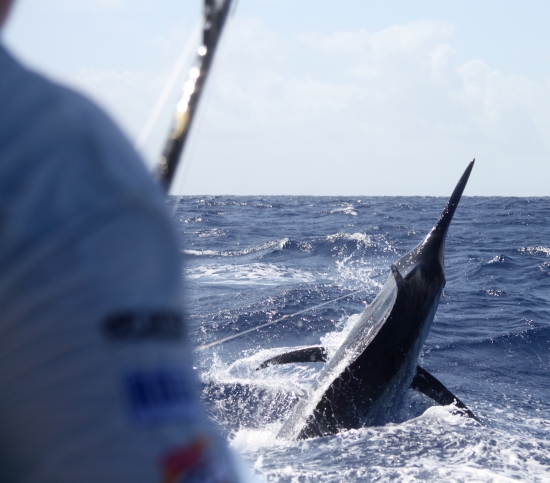 The drag was increased to 10kg as the hook bit, line tightened and the rod loaded under pressure. Line screamed from the reel as the fish accelerated – the sound of the ratchet was deafening above the roar of the engines as Viking II was in hot pursuit in reverse. Bagwah pushed the drag lever to strike (20kg) which forced the fish to take to the air 300m behind the boat. Billy screamed that it was a huge fish. Line continued to crackle from the reel as the fish dived and Bagwah began to pump and wind. Billy demonstrated his years of experience by manoeuvring the boat to counter the fish's every move in an epic game of "cat and mouse".

The presence of sharks is a problem on the reef so fish had to be subdued quickly. The drag was pushed up to 40kg and Bagwah’s 130kg frame was being lifted out of the chair like a rag doll as the fish continued to pull line. Line was lost and gained for the next few minutes before the stalemate was broken and the fish broke the surface less than 30m from the boat. The incredible dimensions of the fish were then realized as it was on full display only metres away as I tried to stay focused on recording its image with the camera. The analogy that comes to mind is having an angry 500kg+ rodeo bull tethered to the end of the line. "Well over the mark!" is the call from the tower – another grander for Bagwah?

The pressure is maintained and after several jumps and surface runs the leader is in reach of Carl’s gloved hand. Wraps of leader are taken as the fish turns away and jumps ... it has to be let go (or dumped) to avoid dislocation of the leaderman’s shoulder or being pulled overboard. On the second attempt, Carl demonstrates textbook technique to secure the huge fish momentarily boatside and quickly release it to swim away.

We were all ecstatic to witness and be part of Bagwah's third catch & release grander black marlin on Viking II. The significance of this achievement will soon be permanently recorded in ink as another tattoo to go with Bagwah's other two will be proudly displayed on his forearms. 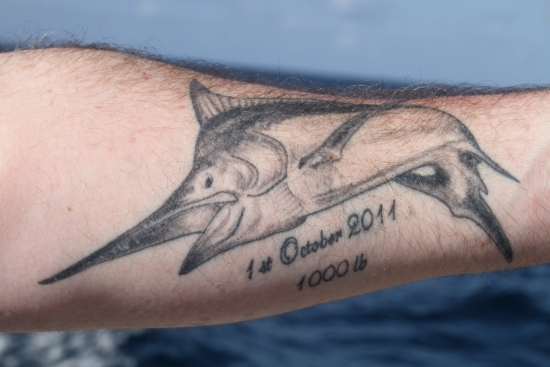 Bagwah will soon be sporting more ink to match his existing forearm tattoos that commemorate his first two granders.

Fresh baits were immediately deployed. We caught another 500lb and 200lb fish that afternoon before heading back behind the reef at 6pm for a freshly caught seafood dinner and further celebrations to cap off a memorable day in a beautiful place with great company. 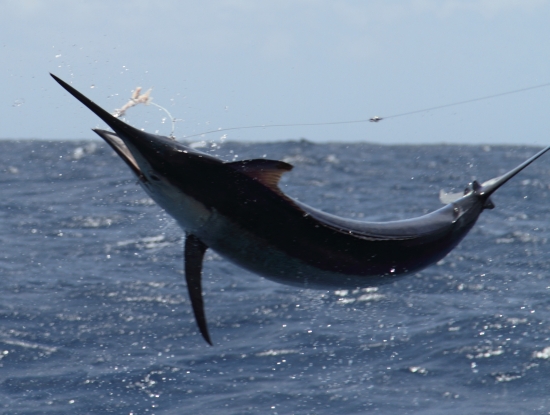 Over the four action packed days, we caught and released seven marlin in total including several between 300 – 500lb with the smallest being 200lb. It was an awesome experience to fish in such an incredible location with great guys, a fantastic boat and the ultimate professional crew (Captain Billy, Carl and Westy). I can now mark this off my bucket list! 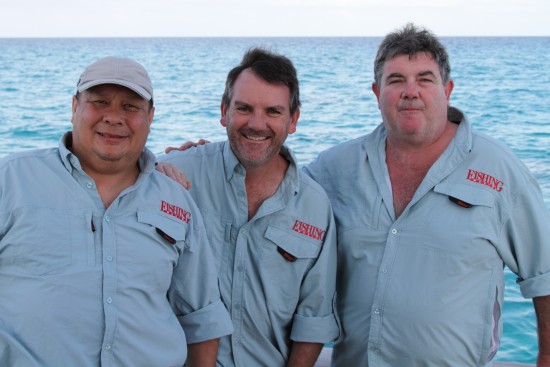