IN early May, Fisho had a piece on a new jewfish tagging program that's now underway and being coordinated by NSW DPI, in conjunction with ANSA NSW.

Fast forward several months and the program seem to be going from strength to strength as critical data is being obtained. The effort by the 50 dedicated taggers, Julian Hughes and colleagues from DPI and Stan Konstantaras and Chris Anagnostou from ANSA has been nothing short of tremendous.

The overwhelming response from the angling public has been incredible; daily jewfish enthusiasts are putting their hand up to help the program. Put simply, Stan and Chris don't have the resources to handle an immense number of anglers, and have had to keep the number of taggers capped. So for anyone who has voiced their help and was not given tags, don't take it the wrong way, there's a very good chance in the near future you may get involved if more resources are allocated to the program.

To date the stats have been quite impressive and DPI is eagerly awaiting what the future may bring in terms of recaptured data. So far there have been three recaptured tagged fish, all from separate locations Hawkesbury, Coffs Harbour and Botany/Georges River.

Possibly the most interesting data so far has been the Botany/Georges River fish that I personally tagged; Tagged: 18/3/2014 in Botany Bay at a length of 72cm; Recaptured: 4/7/2014 in Chipping Norton Lakes at a length of 74cm by Andrew Scalteri. The fish was at Liberty approximately 110 days and grew around 2cm and moved an amazing 30kms from its original tagging point. Just goes to show that the practices in place in Botany Bay can affect the whole system and vice versa - food for thought. It is also worth mentioning that Andrew re-released this fish in good health, top effort! 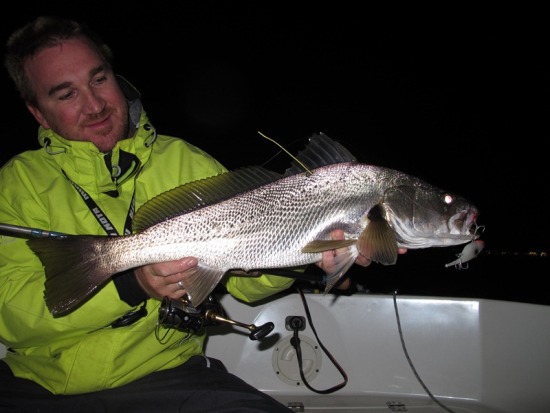 The other recapture was in the Hawkesbury by Dan Selby and only brought minimal data as it was not at liberty for any significant time or had moved any great distance from the tagging location. Though on the contrary, I still reckon it is good to see it survived and returned to its normal feeding behaviour, showing any recapture is of significance.

Since its inception the program has stretched to approximately 150 tagged fish spread from Batemans Bay through Evans Head with five location break ups.
Percentage of caught fish per area:

So far in the tagging program, 91 per cent of fish have been captured on lures. The size range distribution to me tends to reflect the most common sizes encountered in estuaries by soft plastic fishos. 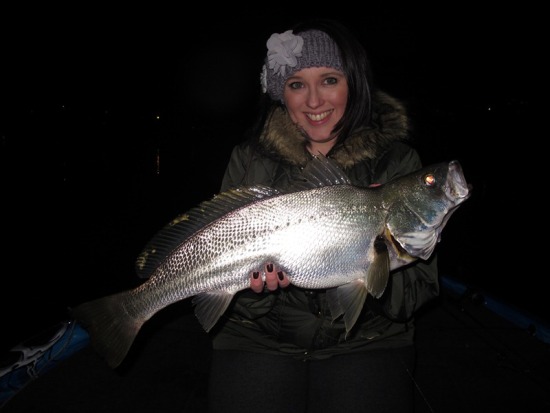 Natalie Black posing with a nice jew prior to tag and release - her first for the program.

I have to express gratitude to all the anglers who are out there placing tags to help this program, notably George Armao with 31 with the vast majority land based - damn good effort! Also thanks to Dan Selby, Gavin Hackett, Andrew Skentzos who have all surpassed 10 tags. But with tags going in daily I’m sure many names will appear in the following update.

The aforementioned Dan Selby of Sydney Sport fishing charter fame predominantly guides on the mighty Hawkesbury River. He is offering the option for his clients to tag any caught jewfish on his charters. Recently, lucky angler Nathan Bradley landed a whopping 144cm on charter and elected to tag the fish making it the largest in the program so far. 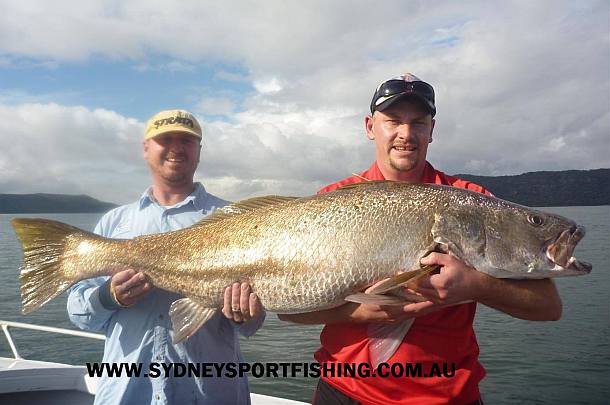 Dan Selby and Nathan Bradley's 144cm monster tagged and released on the Hawkesbury. 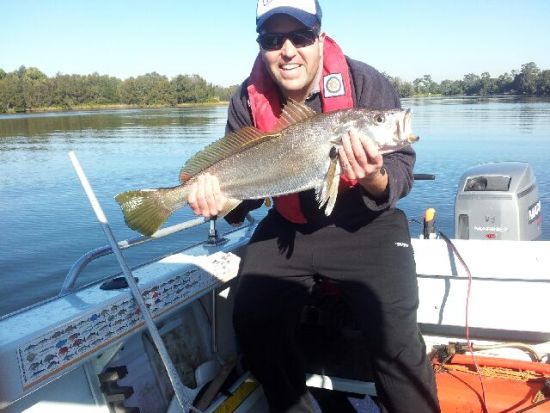 Andrew Scalteri with a 74cm jewie he recaptured at Chipping Norton Lakes and released again.

Listed below are all the fish that have exceeded 100cm a respectable fish in anyone’s book.

So if you are out there fishing and snare a jewfish keep an eye out for the Fisheries tag. If you do catch one please note down length, location and date - also it would be greatly appreciated if the fish could be re-released.

Any info regarding recaptures or the program please e-mail the following: Julian.Hughes@dpi.nsw.gov.au or Stan Konstantaras at pastelli@netspace.net.au.