Despite the severe spinal deformity, the fish was kept for the table along with another mulloway the same size. Both frames were donated to the RAP for ageing.

NSW DPI says analysis of the two mulloway revealed some interesting details. Both fish measured exactly the same size (91.5cm) but the otoliths (ear bones) of the deformed fish was nine years of age, four years older than the second fish. See the image below showing the otoliths from both fish with the larger specimen coming from the deformed fish. 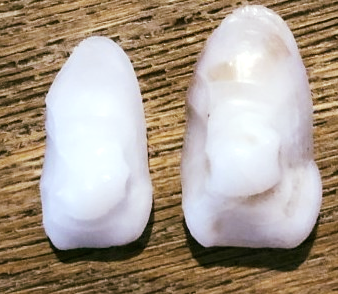 The average size of a nine-year-old mulloway is 110cm, so Chad’s fish was almost 20cm shorter than normal due to its spinal deformity. Fish scientists say such spinal conditions can be caused by genetics, injuries, disease or environmental factors.

The NSW DPI RAP says although the spinal condition had obviously limited the fish’s growth, it nonetheless managed to survive for nine years, demonstrating the amazing resilience of some fish species.