Born in Wynnum, Queensland in December, 1918, Midgley fought overseas during World War 2 before returning to Australia and going on to become a self taught authority on Australia's native freshwater fish.

Midgley is recognised within Australian fish biology circles as a true fish research pioneer. With his late wife Mary, he made many scientific discoveries concerning the behaviour of fish – including the fact that Australian bass migrated to breed in brackish water.

Amongst Hamar's many achievements can be included the writing of several books relating to Australia's freshwater fish species - including the well known Field Guide of Freshwater Fishes of Australia, co-authored with G.R Allen and M. Allen - and detailed studies of the waterways in which they live.

Modern day anglers owe a great deal of gratitude to Midgley who is largely responsible for introducing the, now widespread, practice of stocking impoundments with native fish such as bass, perch, saratoga and barramundi.

In 1984 Midgley was awarded the Order of Australia (OM) for studies of native freshwater fishes. In 1994 he received an Honorary Doctorate of Science from University of Queensland for outstanding contributions in the fields of fish biology and ecology.

“Hamar was a giant in the freshwater fish world, and he had an extensive knowledge of the freshwater fishes, the waters and limnology of Queensland and the Northern Territory,” says Stuart Rowland, principal research scientist for NSW Fisheries.

“A life well lived, he was an inspirational person with many significant achievements. Truly a great Australian.”

In his book Rivers and the Sea, legendary Australian fishing writer Vic McCristal wrote of Midgley:

"In northern Australia there are dozens of rivers that most of us have never heard of. They contain huge volumes of fresh water, and what little we do know of them is due to Hamar and his wife Mary."

"Success for Midgely meant nothing more than enriching the lives of others. Through success or failure; apathy or fund strangulation, fishermen have cause to remember Hamar, and thank him," McCristal wrote.

In a tribute to Midgley who was inducted into the Australian Society for Fish Biology's Hall of Fame, Stuart Rowland wrote a biography of his many life achievements, reprinted below with permission.

There will be a memorial service for Hamar Midgley at Gregson and Weight, Nambour, at 10am, Saturday 4 October. 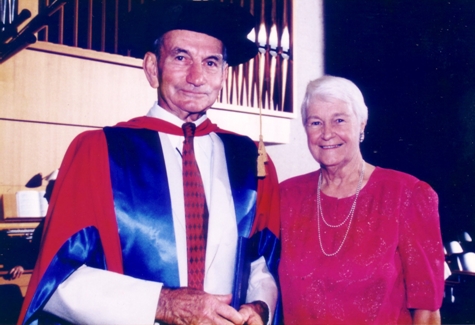 Hamar and Mary Midgley at the University of Queensland ceremony in 1994 where Hamar was awarded an Honorary Doctor of Science for his contributions to the study of Australian freshwater fish.

Stephen Hamar Midgley, known to all as Hamar, has been a self-taught authority on the freshwater fishes and limnology of northern and central Australia for over 50 years. He is a true pioneer, and his knowledge of native fishes and inland aquatic environments is unsurpassed. He combines a deep passion for freshwater fish, with great bush skills, an enormous capacity for work, and a commitment and dedication to his field of study. He is a man of great integrity and principles, with a deep love of his wife Mary and their family. Hamar calls a spade a “bloody shovel”, and his stature and forthrightness have been known to intimidate people! Hamar is an enigmatic giant who is greatly admired by all who have had the privilege to know and work with him, and he has had a significant influence on many scientists and fisheries managers, as well as the policies and activities of government departments, local councils, mining and pastoral companies, and various fishing and fish stocking groups.

Hamar Midgley was born at Wynnum, Queensland on 7 December 1918. He spent his early life in the Nambour area before attending the Southport School and a school in Warwick, England. Hamar commenced work as an Articled Pupil Surveyor at Nambour. In October 1939, he joined the Australian Army and was commissioned in 1940. Hamar married his beloved Mary in Brisbane in 1942. He served with the 7th Division, 2/5th Field Artillery Regiment and had Sir Roden Cutler VC as a fellow officer. The Regiment served with distinction in North Africa and the Middle East before returning to New Guinea where it was involved in battles such as Buna and Sanananda. Hamar left the Army in 1945 and returned to Nambour where he became a woodworker and furniture maker.

Hamar’s pioneering fish work began in the early 1950s with a study of Australian bass (Macquaria novemaculeata) in the Maroochy and Noosa rivers where he collected a data set that would be the envy of current scientists. He was the first person to actually show that bass were catadromous and migrated from fresh to brackish water to breed. In the early 1960s, Hamar undertook the first official stocking of native fish in Australia, spotted barramundi (Scleropages leichardti) into Borumba Dam on the Sunshine Coast. This stocking established a self-maintaining population that still supports an excellent, sustainable recreational fishery today. He had pioneered the stocking of native fish in Australia! Other pioneering efforts have included; describing reproduction in the mouth-brooding S. leichardti; hormone-induced breeding of native fish; use of knotless nets and anaesthetics for handling fish; transporting native fish long distances; using a catheter to sex fish; recognising that snub-nosed garfish (Arrhamphus sclerolepis) can breed in freshwater and that golden perch (Macquaria ambigua) can breed in winter in the Lake Eyre System.

In the 1960s, the late John Lake befriended Hamar and these two giants of Australian freshwater fish biology undertook a number of field trips into the inland. Hamar introduced John to the wonders of fish in the north, and the excellent book “Freshwater Fishes and Rivers of Australia” (1971) is testament to Hamar’s influence on John Lake.

Hamar’s early work was mostly self-funded, then between 1964 and 1994 he worked fulltime as a Fisheries Consultant and was involved in hundreds of studies and field trips through-out Queensland and the Northern Territory, many accompanied by Mary. The studies were contracted and funded by numerous bodies including the Commonwealth Government, Queensland Fisheries Service, Queensland IWS Commission, Queensland Electricity Commission, the Australian Atomic Energy Commission, Mt Isa Mines Ltd, Office of the Supervising Scientist (Jabiru), Ranger Uranium Mines Pty Ltd, the Northern Territory Government, Theodore Coal Pty Ltd, Ingham’s Enterprises Pty Ltd, Griffith University, University of New England, Australian Geographic, as well as many city and shire councils. In the 1970s, the Midgleys conducted various field and laboratory studies of freshwater fishes in association with proposed uranium mining and Kakadu National Park. 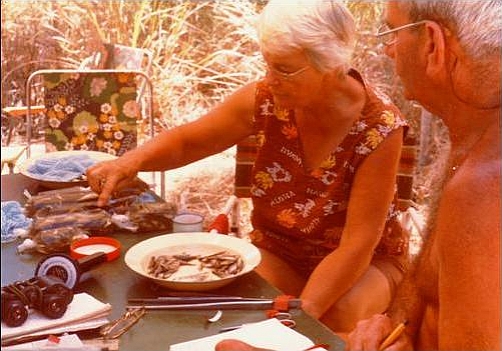 Hamar and Mary at a bush camp sorting the catch-of-the-day.

Hamar and Mary sampled fish, monitored water quality and recorded aquatic habitats in freshwaters throughout all of Queensland and the Northern Territory, accumulating a vast amount of data and knowledge, much of which was presented in reports to the contracting agencies. Their last field trip was in 2001 at the ages of 81 and 79 respectively! Their passion for fish and aquatic life is paralleled by their love of all terrestrial flora and fauna, particularly birds, and even today they diligently record the birdlife at their home in Bli Bli. Besides being only too willing to pass on his extensive knowledge, Hamar has a thirst for learning and loves talking about fish. To spend time with Hamar and Mary is to experience wonderful hospitality and, as he would say “learn a bloody lot”. Fishy discussions, well fuelled with copious amounts of beer and spirits, always extend well into the night and early morning. 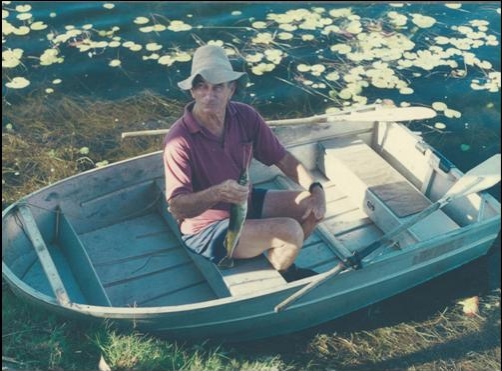 Hamar in his dinghy and bush hat with a long tom (Strongylura krefftii) sampled from the Retention Pond #1, Ranger Mine, Jabiru, Northern Territory.

In 1968, Hamar was awarded a Churchill Fellowship to study Nile Perch in Africa with the aim of evaluating its potential for stocking impoundments in Queensland. Although this project had the support of some eminent scientists including John Lake, it was controversial and created divisions within Australian fisheries and academic communities. Eventually a decision was made not to stock.

In recognition of his extensive knowledge and contributions to fish biology and ecology, Hamar has received numerous official accolades. In 1975, he was elected a member of The American Institute of Fishery Research Biologists, and in 1992 was granted Emeritus status of that Institute. In 1984, he was appointed a Member of the General Division of the Order of Australia (AM). In 1994, he was awarded an Honorary Doctor of Science by the University of Queensland. He has been President and is a Life Member of the Australian Society for Fish Biology. Three species of fish bare the Midgley name: silver cobbler, Arius midgleyi; Midgley’s grunter, Pingalla midgleyi; and Midgley’s carp gudgeon, Hypseleotris sp.

Hamar and Mary have six children and 12 grand-children. They live in their home of 40 years at Bli Bli on the Sunshine Coast.

Hamar Midgley is truly a giant of freshwater fish biology, a great Australian and we owe him a debt of gratitude. Sincere thanks Hamar and Mary.