Morning Star has set out to design an aluminum plate boat with the soft ride and sleek appearance of fiberglass. Scott Thomas Reports.

Major advances in boat hull design don’t come along very often. The launch of Morning Star’s M460 Angler may well change that and, in doing so, turn aluminium boat design on its head. It may also throw a spanner in the works of the old “’glass vs aluminium” debate.

Morning Star has designed this aluminium plate boat with the appearance and soft riding characteristics of fibreglass. According to Morning Star’s Ian Wang, the company underwent a five-year design process before unveiling the boat late last year.

Wang employed the services of a Sydney-based shipwright to design the boat and took the manufacturing process to Taiwan. The facility in Taiwan is key to the boat’s high quality build and unique design. The Taiwan factory is an established car making facility with state-of-the-art robotic manufacturing processes. The result is a boat with consistently strong and clean welds and tough construction.

Morning Star boats are constructed with a single piece aluminium hull bottom. There’s no join at the keel and overall the shape is reminiscent of a ’glass hull with a variable deadrise starting at 18 degrees. Strakes and a decent reverse chine ensure the boat holds during turns and pops onto the plane easily.

Wang says the one piece design eliminates the standard keel design and sharp entry associated with many modern tinnies. The Morning Star’s one-piece design allows it the freedom to shape an efficient hull for a smooth ride and good stability.

The 460 Angler is a plate hull built using marine grade 5083 aluminium alloy sourced from the US. 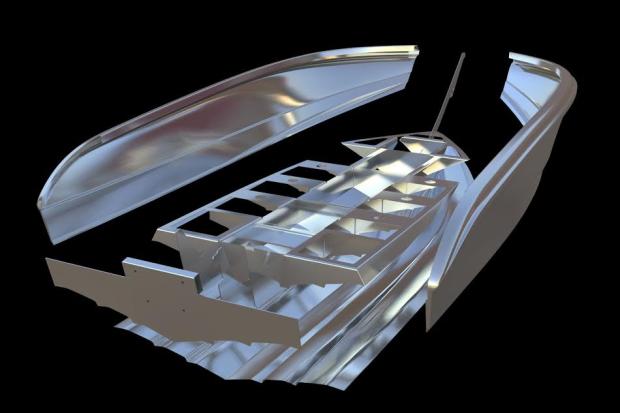 The Morningstar Boats are revolutionary because of its unique aluminium plate formed hulls.

Morning Star designed the 460 to not only perform like a fibreglass boat, but also look like one. They’ve done a pretty good job – this is a nicely finished boat. The interior reminds me of a standard aluminium centre or side console with a fairly basic console and carpeted floor. There is an option to upgrade to a plate aluminium floor which becomes self draining. Not a bad option, in my opinion, and good for a boat of this size.

The console is large enough to accommodate an extra big sounder/GPS with space for more gadgets. There’s also plenty of storage underneath to hold tackle or safety gear.

Layout and custom fit out

Morning Star’s 460 Angler comes with the option of centre or side console. The manufacturer has smartly designed both consoles with the same dimensions. With a few tools, the owner can swap from side to centre or vice versa. All that’s needed is a different seat configuration. It’s an interesting idea and also makes it so a boat dealer can order the one boat and supply the customer with a side or centre console, depending on the buyer’s preference.

The casting platform can also be removed or replaced with a slightly longer version.
Morning Star and Sydney dealer Enterprise Marine will also supply the boat with a number of options including livewells, electric motor bracket, the aforementioned plate floor and more.

Centre and side consoles offer good amounts of space for fishing and the 460 Angler is no exception. The layout would allow for two or three lure or fly casters. It’s a basic layout with side pockets for storage and space for tackle bags and batteries at the transom. Storage space is at a premium, as it is with most open boats this size. The boat is rated to a maximum of five people. 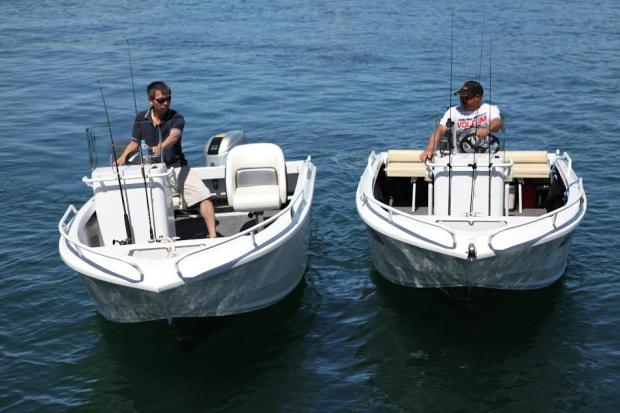 Morning Star has side and centre console options available.

Does it really ride like a fibreglass boat? For the most part, I found the ride to be very good. It was eerily similar to a ’glass hull.

We launched two boats, a centre and side console, at Sydney’s Pittwater with a strong nor-easter blowing. We cruised at about 20 knots head on into the chop. The Morning Stars performed well. The bows rode high and only a little trim was required to push through the rougher water.

At only 4.6m, the 460 Angler (in either configuration) proved to be a nimble boat that punched above its weight in terms of sea worthiness and manoeuvrability. Even with a swell and chop rolling through Broken Bay, the Morning Stars felt quite safe at reasonable speeds. This hull, regardless of whether you choose side or centre console, seems ideally suited to a budget or space conscious fisho looking for an estuary and occasional offshore boat (when conditions allow). The options for small, tough and seaworthy centre and side consoles are fairly limited. In my view, the Morning Star will nicely fill this void.

The test boats were fitted with 60hp outboards –  a Honda four-stroke and a Mercury four-stroke. The 60 is maximum rated horespower for the 460 and a good match for the hull. A 60hp is an affordable option and will keep the overall cost of the boat within reach of many fishos. I wouldn’t recommend anything smaller. With two people onboard, we recorded a comfortable cruising speed of 20 knots at 4000 RPM. WOT was 28 knots and 5400 RPM. It won’t break any speed records, but unless you’re in the market for a speedy bass boat, this sort of power and performance would suit most people.

Morning Star set out to design and build a boat with a difference. For the most part, that’s exactly what has been achieved. My time in the 460 Angler indicates it’s a dry and soft riding hull with great stability. If you’re in the market for a versatile centre or side console and prefer the toughness of aluminium over fibreglass,  I recommend you check out the Morning Star 460 Angler. It’s well worth a test ride!