Morningstar has taken its range of versatile alloy boats to the next level with the unveiling of its cuddy model. Review and images by Scott Thomas.

Fisho has previously reviewed Morningstar's M460 and Bay Fisher. Both of those models are open centre console configurations – a popular choice for estuary fishos in warmer climates. After listening to customer feedback and recognising a need for such a boat, Morning Star modified its hull to include a cuddy version of the popular range. The new boat, the Sports Cuddy 498, should appeal to fishos in those cooler climates or for someone looking for extra wind and spray protection.

For those unfamiliar with the Morningstar brand, here’s a quick recap. Morning Star manufactures its boats in an automotive factory in Taiwan. The big point of difference is the use of robots during the construction process. Why? This process, according to Morning Star, allows for a higher standard of construction. The company isn’t necessarily manufacturing offshore to save dollars; it's more about the quality of the finished product. Morningstar also has a strong following in other Asian countries, so it makes sense to construct them in Taiwan for distribution purposes. 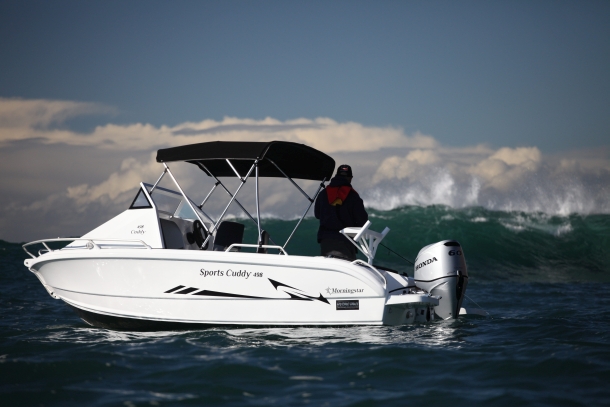 The first thing you’ll notice about the Morning Star hull is it doesn't look like a standard aluminium boat. Thanks to this construction process, the hull’s appearance, and ride, is reminiscent of fibreglass with its smooth lines and attention to detail.
The boat’s hull is constructed with a single piece of aluminium. It has no join at the keel and has a variable deadrise starting at 18 degrees. The one piece design, according to Morning Star, eliminates the usual keel design and sharp entry associated with most tinnies. This design allows Morning Star the freedom to shape an efficient hull for a smooth ride and good stability.
You can find more details on Morning Star’s construction process at the company's website at www.morningstarboats.com.
While Morning Star’s new model is based on the same hull as previous models, it feels like a different boat. Morning Star has always been conscious of feedback and has made a series of  modifications which continually improve the fishability and overall usefulness of its boats.

So while this model has a cuddy attached, it also featured a few new additions to the fit out.
The new transom of the boat features two extra long swim/boarding platforms. The platforms extend the boat’s overall length which now exceeds the 4.8metre mark. According to Morning Star, the new swim platforms offer a safer entry to the boat and can be used to land fish if needed.

The port side of the transom features a large livewell. There’s also a compact removable cutting board on the transom which features two rod holders. Another two rod holders can be found in the narrow gunwale.
Morning Star has continued using the chequer plate floor which it introduced in the Bay Fisher. Unfortunately, due to the build of the boat and the fuel tank’s position, there’s no room for a kill tank or underfloor storage. However, there’s plenty of space in the cockpit for an icebox if you're looking for fish storage. Morning Star has also built in a roomy elevated storage area underneath the cabin where fishing and safety gear can be stowed. It's a good use of space inside the small cabin.
The cuddy model features two seats with built-in lure box storage underneath. There's enough space here for six boxes on each side. 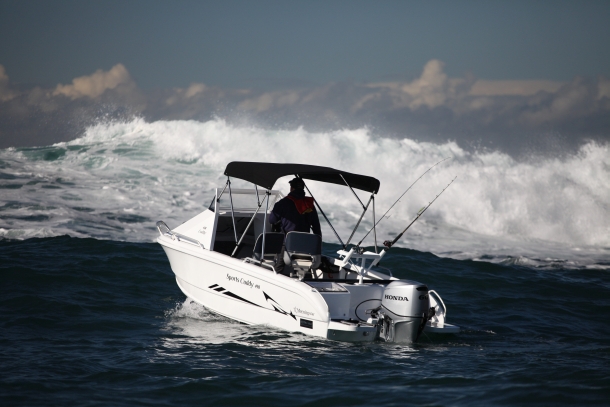 Morning Star has also installed foot rests on the front of each seat box. I found while standing and driving the foot rests would impede on valuable floor space and made it difficult to stand. Perhaps the foot rests could be shortened or removed altogether?
The helm is neat and simple and the test boat featured Honda’s VeeThree gauges. The gauges are NMEA2000 networked and allow you to see everything from speed, RPM, fuel, battery, trim/tilt and plenty more. The dash also featured the standard switches and still had generous space above the steering wheel to install a marine radio or entertainment system. There’s more room on top of the dash to mount up to around a 9-inch sounder. Access behind the dash for installation and wiring is good.

Why add a cuddy?

While open boats serve a purpose and are favoured by sport fishos looking for maximum space, they do have their drawbacks, particularly in bad weather.

Morning Star’s hulls really punch above their weight when it comes to a soft and dry ride. So it makes sense to capitalise on the rough water capabilities and build in this extra weather protection. It opens up new ground for fishos wishing to venture out of the estuary and fish inshore reefs. This boat would make an ideal two person boat for chasing reds and kings along inshore reefs in reasonable weather.

We tested the new cuddy near Broken Bay’s Barrenjoey Headland in a lumpy swell. The boat performed nicely with a soft ride and no spray coming onboard. Being winter, I also appreciated the wind break offered by the cuddy and low windscreen.
The 18 degree deadrise and aforementioned keel design allowed for a soft entry coming off the back of some sizable waves.
With two people onboard I also found it quite stable.

The test boat featured a 60hp Honda four-stroke. While the maximum horsepower rating for this model is 90hp, I found the 60 adequate. If you didn’t mind spending a few more dollars, going up to a 70hp wouldn’t be a bad option, while a 90 seems a little excessive and probably not necessary.

I found the Sports Cuddy cruised along nicely at 18 knots at 4000RPM. In calmer water WOT was recorded at 28 knots and 5600 RPM. Not excessively speedy, but fine for most fishos.

Morning Star has again produced an impressive boat, which given its size and price, should have appeal for a wide range of fishos looking for a versatile boat. The cuddy option has taken a good seaworthy hull design and provided the much needed protection for fishing open water or cold climates. Being less than five metres, it’s easily garaged and towed behind an average car. And with a price of $33, 950 its pretty good value! 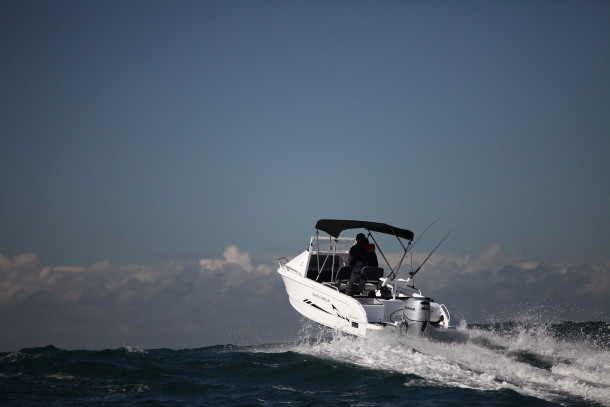