FISHO first noticed the Mad Dog brand at the 2019 Sydney International Boat Show. Lakeside Marine, the Australian distributor for Tohatsu, was showing off this latest Mad Dog centre console on its stand.

Mad Dog is based in rural Victoria along the Murray River and produces a range of quality small to medium alloy boats by hand in its factory. The company makes tinnies from smaller car toppers to these larger centre and side consoles. The Brute tested here comes in 429, 461, 489 and 519 sizes.

On the water
A few months after checking it out at the Sydney show and the Mad Dog 489 Brute was ready for testing, complete with the new MFS 60A four-stroke outboard.

I met Lakeside Marine’s Trevor Robinson and local boat dealer, Tony from Advanced Marine Repairs, at Brisbane Water on the NSW Central Coast. The forecast was dismal with big seas and squalls predicted. Not so great for photos, but perfect for testing a new boat.

The Mad Dog Brute is available in centre and side configurations. The test boat featured a centre console, a good fit for a boat like this with plenty of space left for fishing and other passengers. Typical of a 4.89 metre centre console, this boat offers great versatility. 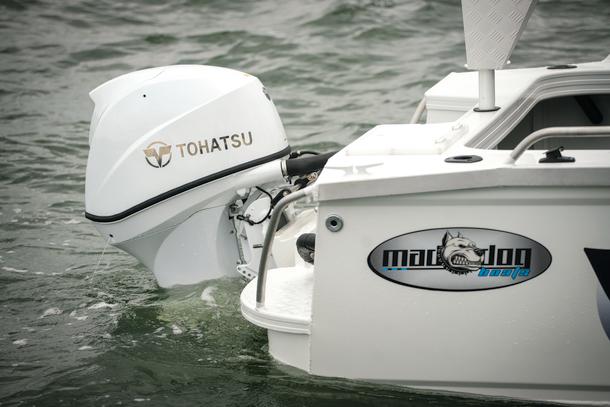 Taking the boat onto Broken Bay on a blustery day was a great test and it passed with flying colours. The Brute gave a great account of itself running through chop and oncoming swell at a moderate cruising speed of about 18 knots. The extra high console gave me, as the driver, plenty of protection from any spray and I remained bone dry. The spray chines did a good job keeping most of the spray off the boat.

At rest stability was good, although felt a bit tippy when two of us stood too much to one side.

While the engine was new and still "running in" we had to be sensible. WOT went about 30 knots at 6000 RPM with a good cruising speed of 18 knots at 4000 RPM. You could step up in engine size, however I though this 60hp was a good match for the 4.89 with two people onboard.

The layout
At the transom there’s a plumbed livewell and removable bait station. The transom is in a pod configuration with duckboard.

Moving forward and there’s a 73 litre underfloor fuel tank. The single pedestal helm seat sits behind the console. This console is narrow, which I like, and high. It offers full protection for the driver. Being extra high, it also features a hinge and can be folded down for low garage roofs and carports.

The pedestal seat given its low height doesn’t offer much visibility while seated. If you prefer to sit while driving, you’d be best opting up to a lean-to seat or cooler box with more height. Mad Dog offers great flexibility with options when ordering a boat.

There’s storage underneath the console and space on top for mounting a large sounder up to about 12 inches. The test boat featured a small Garmin GPS/sonar combo. 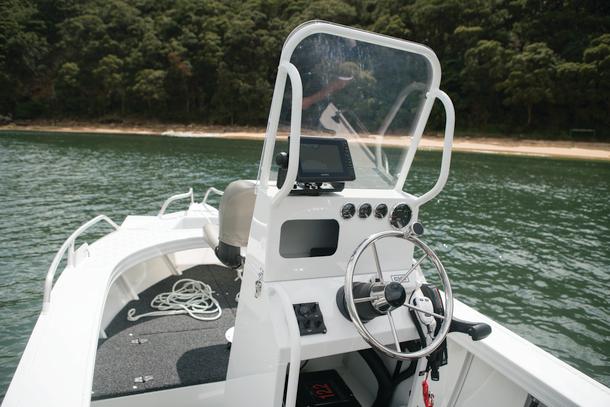 This boat comes with hydraulic steering. Tony reckons cable steering can have problems in centre consoles and is more difficult to install.

Up front there’s a casting platform with plenty of storage underneath. There’s also a large anchor well and trolling motor mount. There’s space for one or two batteries under the casting platform or under the console if needed.
The Brute comes standard unpainted, although has the options of five colours.

Tohatsu’s 60hp four-stroke
Tohatsu was keen to show of its latest addition to the range which was fitted to the Mad Dog.

The MFS 60A ticks a lot of boxes for anyone looking for a 60hp four-stroke. Weighing just 98.5kg, the new engine is 15 per cent lighter than Tohatsu’s previously popular M60C two-stroke. That’s impressive. It’s also 7kg lighter than its nearest competitor.

With old technology two-strokes phasing out, fisho no longer need to to work about heavy or sluggish four-strokes. With models like this one, the future is looking bright for boaters!

The 3-cylinder 60 is very quiet at idle and under way, is fuel efficient, powerful and environmentally friendly.

Tohatsu says the MFS60A retains much of the proven core values from the MFS40/50A. However, “Tohatsu engineers have introduced some interesting “Simpliq Technology” into the new MFS60A, including: three valve intake, roller rockers for friction reduction and anodising along with a unique piston crown.”

It’s also a great looking engine and is available in aquamarine or beluga white colours.

Engines in the 60hp range are a very popular size in Australia, fitting a category of boats we love to use. I have no doubt the Tohatsu with its lightweight properties, fuel efficiency, quietness and responsiveness, will give its competitors a run for their money. 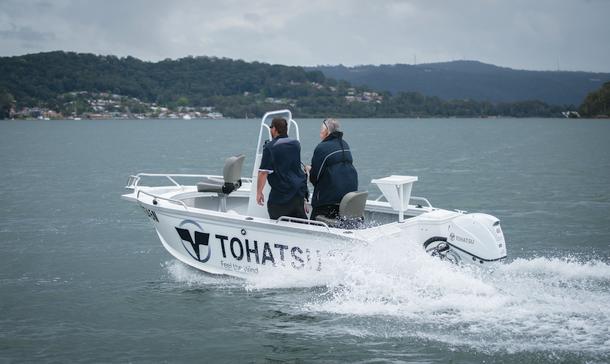 Conclusion
The Mad Dog and Tohatsu combination was a very nice rig. This size of boat makes for an extremely versatile boat. With a safe and soft ride, even in the bumpy stuff, the Brute lives up to its name, seriously punching above its weight. Matched to Tohatsu’s latest ultralight 60hp four-stroke and theres a combination anyone in the market for a mid size serious fishing boat can’t ignore.