WE hear it all the time, “Fishing boats built by fishermen”. And to be fair, after many years of boating journalism, most fishing boats are built by fisherman. But Yellowfin Plate has taken this to a whole new level. There are so many small innovations that make a massive difference, but left us thinking, only a fisho who has spent a lot of time on the water would be able to think of such things.

Yellowfin Plate has released a number of new and revised models in the range and Fisho was lucky enough to be on the Gold Coast to review the Yellowfin Plate 7000 Centre Cab and 7600 Southerner Hard Top. The hulls are a new build that are designed for offshore fishing. The build is a 6mm bottom with 4mm sides that feels rock solid from the helm. The Yellowfin Plate range is built by Quintrex and after doing a factory walk through and chatting to the blokes that build these hulls, there’s a lot of knowledge and experience that goes into each build. These things are not built at the back of a the Quintrex factory by the same blokes who are welding up the tinnies. Instead, Yellowfin has its own factory, its own builders and even its own research and development team. It’s refreshing to see this approach to boat building from Yellowfin Plate.

7000 Centre Cab
Starting with the 7000 Centre Cab, the layout is a generous deck space with a small but functional cabin that will sleep one or a couple overnight. If sleeping a couple, ensure that whoever you are sleeping with is happy to “spoon” for the night because it will be cosy. There is plenty of room in there for storage and is ideal for a portable toilet. The cabin is lockable which is a huge plus and is also a walk around so the cosy design is well justified. The helm is very neat and big enough to have a 12-inch sounder and navigation system build into the console. The test boat also had the Evinrude dials such as speed, trim and fuel mounted above the sounder with room to spare. With the price and the size of electronics these days, having all the gear flush mounted into big consoles is a big tick in the box.

The seats have been dramatically improved. Sitting in a chair that feels like a real skipper’s seat is very nice. The windscreen allows for excellent protection from weather and spray and comes down the side of the boat enough to offer protection from the weather, even when at anchor or trolling. The top has fold down rocket launches and water deflectors to prevent rain and spray dropping off the back on the hard top and all over the poor bloke standing behind the skipper’s chair.

The transom has a very well-designed bait board with a live bait tank on one side and transom door on the other. The live bait tank has a viewing window and the transom door is a quick and easy lift to open mechanism instead of a bolt that can be cumbersome. It’s all these little touches that left me thinking that the Yellowfin Plates have been designed by a team that has spent a lot of time on the water.

The big heavy plate hull did not disappoint on the ride quality. Powered by 200hp Evinrude, the hull was able to be trimmed to lift the bow which created a very soft and quite ride. The Evinrude pulled the 7000 Centre Cab out of the hole nicely and had it cruising at 23 knots at only 3500 RPM. Baxter Bolton from Yellowfin Plate was kind enough to do the math and with its 320L fuel tank, this cruising speed allows for a range of just under 400kph. Opening the 200 HO Evinrude up achieved a top speed of over 38 knots. Boat, motor and fuel will push the 7000 Centre Cab to over 1500kgs which was surprising. This is a lot of boat for 1500kgs and feels a lot heavier on the water but can be towed by the family 4WD or work ute without any problem. Overall, it is a very impressive offshore fishing boat that needs to be seen to do it justice. The welds are clean and the finish is hard to fault. It’s bound to impress as much at the boat ramp as it will on the water.

7600 Southerner Hard Top
The 7600 Southerner Hard Top is without doubt the flagship of the Yellowfin Plate range and has it all for the serious offshore angler. Built to the same quality and standards as all the Yellowfin Plate range but as soon as you step on board, it has the feel if a big and luxurious hull. It still has the checker-plate floor and fishermen’s layout so we are not talking limousine luxurious, but fishing luxurious. The seats are better than my lounge at home and the cabin is big enough to sleep two in comfort with “spooning” being an option, not a necessity. The seats can even be optioned up with suspension making them even more comfortable and good for those of us that get a sore back after a day on the water. It has all the basics as well as the innovations that the 7000 Centre Cab has but with added deck space, a massive 380L fuel tank, 2.4m beam with a 7.6m hull. It will come in at 2000kgs with boat, motor and fuel so can still be towed by the family 4WD. The Southerner Hard Top has an amazing range of over 700kms at a cruising speed of 20 knots at 3000 RPM. If that doesn’t get you to the reef and back you are doing something wrong. But for anglers who want to be out for a few days, this is the boat that will allow that to happen without filling the deck with fuel cans.

From the helm it is a very simple hull to operate and as to be expected, the 300 ponies bolted to the transom has no trouble pushing the 7.6m hull along. The 300hp E-Tec has a real rumble to it and we loved the sheer grunt that comes from such a powerful engine. The Evinrude did the hull justice and had no trouble launching the Yellowfin Plate and managed to top speed of 42 knots.

The transom is similar to the 7000 but with a bigger and better bait board with a very impressive built in tackle box that holds 10 full size tackle trays. Anyone who has tried to keep the boat uncluttered while fishing will tell you how nice it is to have a full sized, built in tackle box and if you haven’t experienced this before, you’re about to be spoilt. 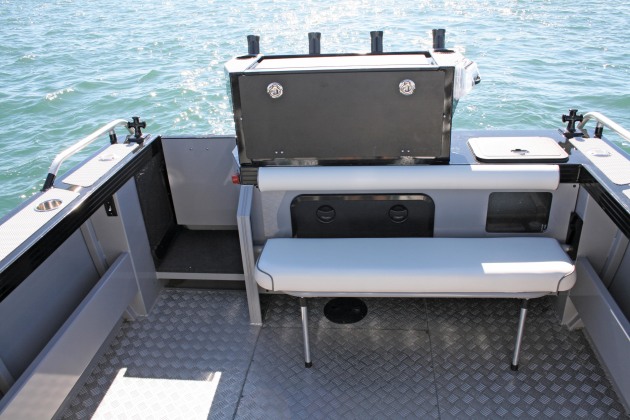 Fishability
As impressive as these hulls are, they are designed for fishing. Whether you use it in the bays, bottom bashing the reefs or trolling the blue water, the Yellowfin Plate is a very comfortable hull to fish from. The gunwales are a good height to play a fish in with enough room to dig the knees into the bottom of the gunwale when it gets a little rough. The transom has plenty of rod holders on the massive bait board and the walk around design of the 7000 Centre Cab is perfect for playing in the big ones. While the 7600 is not a walk around, the standard rails with a non-slip surface underfoot makes getting past the cab and onto the bow very easy. There are fishing options galore so Yellowfin Plate have the bay angler covered as well as the game fisho who wants to troll a spread out wide all day long. The massive fuel tanks come at the expense of no kill tank which will only upset mackerel and wahoo anglers whose fish will need to be cut up before they will fit in the eskies under the seats. Everything else including big snapper and most king fish will squeeze in and the quality as well as their positioning will make sure the catch is colder for a lot longer than any floor mounted kill tank could manage.

There’s too much to cover completely in this review so to do these hulls justice. Keep an eye out for the new Yellowfin Plate range at your dealer or next boat show. The entire range left us very impressed. The Yellowfin Plate range has a Platinum model which is loaded with options as well as a base price (Noted below) for those who prefer to option the hull up themselves.