Light tackle spinning from the stones

WHEN I first fished the rocks for tailor, salmon, little tuna and other speedy pelagics as a youngster, light spin outfits and lures didn't even get a look-in. Back then, we were obsessed with fishing with whole pilchards, ganged-hooks, heavy line and broomstick-style surf rods. And we weren't alone.

In the '80s, pilchard-tossers ruled the rocks on the NSW far south coast. Sure, there were some spin guys on the stones around Jervis Bay and further north, but they weren't exactly fishing with light tackle. And going light and hurling lures certainly wasn't in vogue where I fished. We caught plenty of fish on our heavy set-ups, but it was a cumbersome approach. Tailor and salmon made up most of our catch. We'd often get bonito, frigate mackerel and sometimes rat kings as by-catch.

Looking back, though, it makes me wonder how many more fish we would have caught if we decided to wise-up and change our tactics. These days, unless I'm chasing drummer, big bream or groper, all my rock fishing is done with light spin outfits and metal lures. It's an enjoyable, active and very productive approach to rock fishing that yields genuine results. I catch more salmon, tailor, bonito and other pelagics than ever before — and walking the south coast rock ledges and breakwalls with a spin stick and fistful of metals sure beats battling with a heavy surf outfit and a bucket of frozen bait.

Plenty of fellow south coast rock-hoppers have done the same. I'm often fishing alongside half-a-dozen other anglers armed with spin gear and chrome lures. A lot of these are young blokes, which is great to see. It's awesome when we all hook-up at the same time and glance over at the puzzled bloke casting pilchards, waiting for a bite. With the water and weather warming up, right now is a good time to spin the stones in south-east NSW. If you're looking to ditch the cumbersome gear and enjoy light tackle luring at its best, here are a few tips and tricks that will help you get results this season. 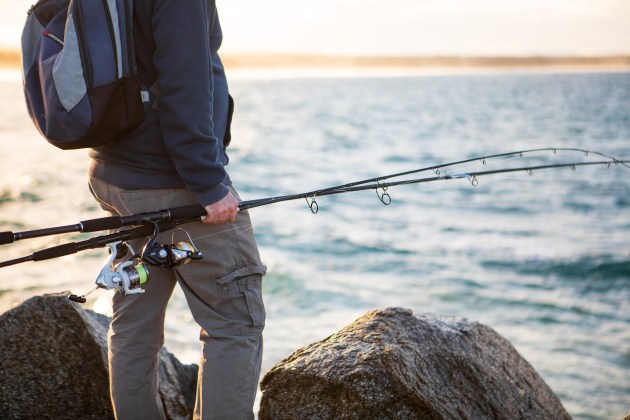 WHY GO LIGHT?
Being mobile, being able to cast long distances, and being able to cast for hours are all crucial when spinning the stones. Going light enables you to do all of these things. In fairness to the rock hoppers of the '80s, the tackle available to today is streets ahead of what we used 30 years ago.

Light but very strong spin rods, capable of hurling chunks of metal and then dealing with a rampaging salmon or speedy bonito, are available off the shelf at just about every tackle store — at a good price. Coupled with a quality threadline with a sound drag and fast gear ratio, and you have yourself an outfit that will be comfortable enough to cast all day, yet robust enough to handle most small to medium-sized inshore pelagics. Add some relatively light braided line, and you'll be able to flick metal lures in the 25-40 gram range at least 50 metres — and sometimes up to 70 metres with a tail-wind.

Tailor, salmon, bonito, kingfish, frigate mackerel and the like are constantly on the move. Anglers who are able to cover ground will ultimately catch more fish than those who plonk themselves in one spot and wait for the fish to come to them.

I usually carry a single outfit. Sometimes I have two. But that never stops me from moving quickly to a new rock ledge if I spot fleeing bait or diving birds.

Going light also increases the fun factor. Battling a 3kg bonito or 4kg salmon off the rocks on the tackle described above is about as good as it gets. You'll inevitably lose some contests, especially if larger fish get in on the action, or if you're fishing in shallow, snaggy terrain, but that's all part of the excitement.

WHAT GEAR DO I NEED?
A versatile light spin outfit that should suit most rock-fishing scenarios comprises a 2.3 metre (a bit over seven-foot), 5-8kg graphite rod matched with a 4000 size threadline reel.

At first, you might feel a little under-gunned, but an outfit like this is more than capable of handling tailor, salmon, bonito, frigates and small kings. It's exactly the kind of outfit a lot of anglers use for luring snapper and kings on plastics over the reefs, so it's definitely robust enough.

If I'm fishing from low rock ledges I use this sort of outfit exclusively. But if I'm fishing from a higher vantage point, where I might need some winching power to land my catch, I often switch to a nine or 10 foot rod, still in the 5-8kg range.

Similarly, if I'm fishing in extraordinarily tough terrain, where I might need to bully a fish over a shallow, snaggy bottom, I'll opt for the slightly longer rod. But for sheer enjoyment and comfort, the seven-foot stick is my go-to. I mostly use 6-7kg braid and a 201b fluorocarbon leader. I rarely get busted of with this set-up. Take your time with any fish you hook and you'll land the majority.

Salmon are probably the hardest to stay connected to because of their head-shaking antics and acrobatics. A big chopper might bite you off, but that's rare. Make sure your reel has a relatively high gear ratio. Something around 6:1 is good for spinning. You'll be able to get a chrome slice moving at pace, which is important at times, especially if you're chasing mini tuna. 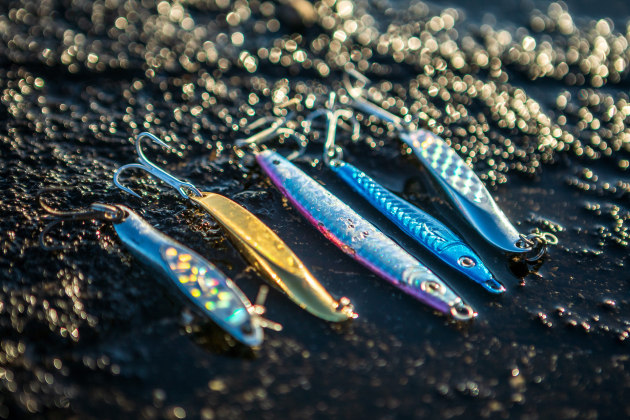 TESTING YOUR METAL
Lure choice for this style of fishing is as simple as it gets. Any metal lure that casts well, has a bit of flash and maintains a decent action in the water will do the trick.

I like chrome slices in the 25-40g range. Similar sized metal baitfish profiles are also really effective. These all cast like bullets and can be retrieved at varying speeds, which makes them perfect for the job.

Fish can be picky when it comes to lure size, so have a variety in your collection. If your target species is feeding on tiny whitebait and the like, they'll often turn their noses up at larger lures. I find small tuna in particular can be very fussy, and I've had to downsize to tiny 18g metals at times. Conversely, big salmon and kings often have a penchant for larger lures, sometimes in the 60g range. Experiment with sizes and styles until you find something that works — and then stick with it.

The great thing about metal lures is they're as cheap as chips so you can stock up without breaking the bank.

Spinning with metals is uncomplicated. Cast them out as far as you can, then wind like crazy... the fish will do the rest!

I personally don't think you can retrieve metals 'too fast'. They'll even get smashed if they're skipping across the surface. In fact, I often deliberately make them skip in order to catch the attention of hungry fish. Bonito, salmon and even tailor will literally break the surface to grab a lure. And believe me, this definitely gets the adrenaline pumping!

Another technique I use to stir up fish and entice a strike is to let the lure sink before beginning a rapid retrieve. Depending on how snaggy the bottom is, you can let the lure sink all the way to the ocean floor. It's a good way to wake up fish that may be hanging deep or not quite in feeding mode. 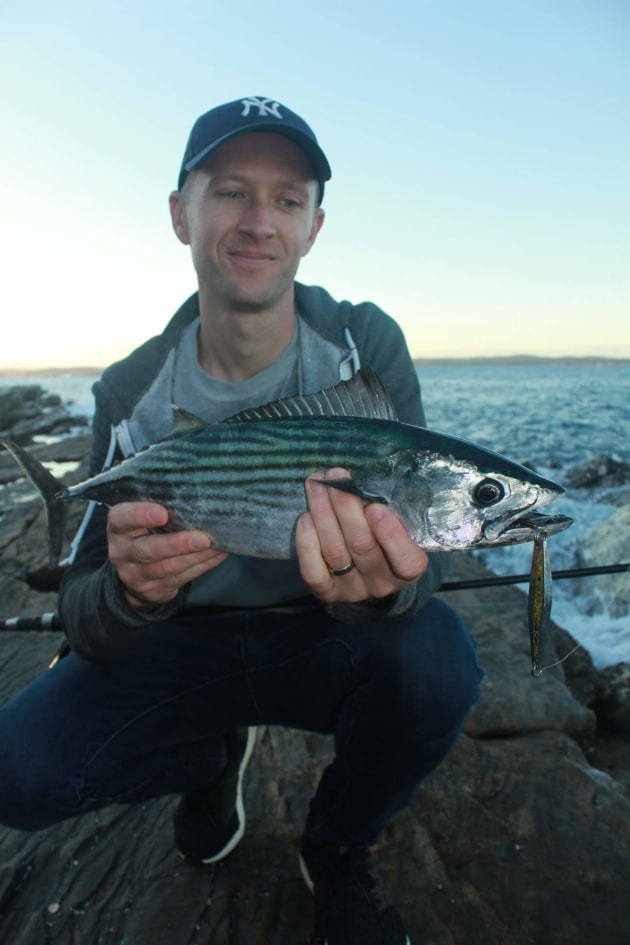 WHERE AND WHEN DO I FISH?
Tailor, salmon, bonito, tuna and kings can be found hanging around just about every headland and breakwall on the NSW south coast. I've caught all these species in shallow water, in deep water, over sand, over rocky terrain, in rough seas and in calm bays. They're food motivated and will follow schools of bait just about anywhere. Find the bait and you'll find the fish.

I favour rocky outcrops that afford anglers access to reasonably deep water — up to 10 metres or so. These areas tend to produce the best mix of species, with tuna and kings in particular preferring these deeper areas. But you'll catch plenty of fish in areas half as deep — or even shallower.

I also like rock ledges that make fighting and landing fish easy; platforms that are flat, close to the water and not surrounded by gnarly snags like cunje beds and thick kelp.

A bit of wash also helps. My best sessions have always been on days with a little wave action — it creates a bit of cover and encourages fish to be bolder and feed more readily. Dawn and dusk are without doubt the peak periods, but I've caught fish on metals throughout the day — even under bright sun.

Tide arguably plays more of a role than time of day. The fish I target relish an incoming tide. I often time my spin sessions to coincide with the first half of the run-in and find it's the most consistent. The final stages of the run-in can be great, too, but the ledges I fish often get a tad wet at the top of the tide which can restrict access and create safety issues.

You can catch small pelagics from the south coast stones year-round but the best period is from November through to late June, give or take a week or two.

Towards the end of a session, with hundreds of casts behind you, your shoulders, forearms and wrists will all probably ache, but when that little spin rod buckles and you hear that drag sing, it's all worth it.