IF you do a bit of research you'll find that fish hybridisation - the inter breeding of seperate species - while nothing new to the aquaculture industry appears rarely to occur naturally in the wild.

While there are examples of natural hybridisation occurring in fish such as the whitefish found in the northern hemisphere; how many examples of it have occurred in Australia?

Amongst our freshwater fish there have been incidences of our iconic native species, the Murray cod, inter breeding with endangered trout cod to form a hybrid. Murray trout? Murray cod trout? It has been documented that trout cod and Murray cod stocked into Cataract Dam on the Nepean River in NSW have hybridised in the past. 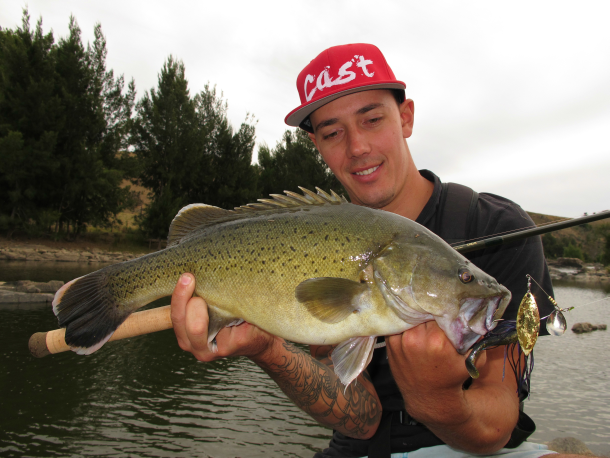 So what does this mean for waters where Murray cod occur naturally and the once critically endangered trout cod has been re-stocked? Especially as when the two species cross breed the hybrid offspring are infertile.

Fisho writer and native fish fan Chris Cleaver has been pondering these sort of questions after a recent catch he made.

Here's what Chris told us in an email:

We had being doing a usual ritual for the last few weeks grumbling along the bank on a NSW western drainage river.

The first few hours had been quite slow, the water had risen and was noticeably cold from the previous week, generally a sign of very lethargic fish.

I had just finished re-tying a new leader and spinnerbait on - the perils of bank fishing, you do get good at rigging as snags can be common place.

I walked to find Ben working a snag pile that literally had a sign on the branch saying "Muz’s Place". I watched a few casts, anticipating action but it was not forthcoming.

Moving only 20m along was a few large boulders piercing the 4000ml flow and creating a nice back eddy with a sizeable hole beyond them. I slung a cast to the corner of the furthest boulder and commenced a slow retrieve, immediately I had a bump. I continued to go through the rhythmic pattern and and just as the spinnerbait came into view it was slammed. Immediately I exclaimed it was a big "trouty".

In the colder water the fight was quite short but torrid. Ben had quickly arrived with the grippers and secured the prize. He laughed and said "get your eyes checked old boy, she is a Muz" (Murray cod). I quickly ran my "old boy" eyes over it ... It definitely had the head and spot pattern of a trout cod. The trout cod pattern was also was around the pectoral fin area. The rest of the body and pattern seemed to be of a Murray cod. Noticeably, the fin tips look like someone had struck them with a highlighter pen as they exhibited a bright orange and white.

We quickly photographed the fish and returned it to the water, I did notice the fish was of "medium" muscle feel also. Trout cod feel like a rock and Murray cod tend to feel soft and squishy - this was somewhat between the two.

It powered off well and I’m sure some lucky angler will also get to tangle with this "hybrid" cod I like to name a Murrout cod.

But will they be able to tell? 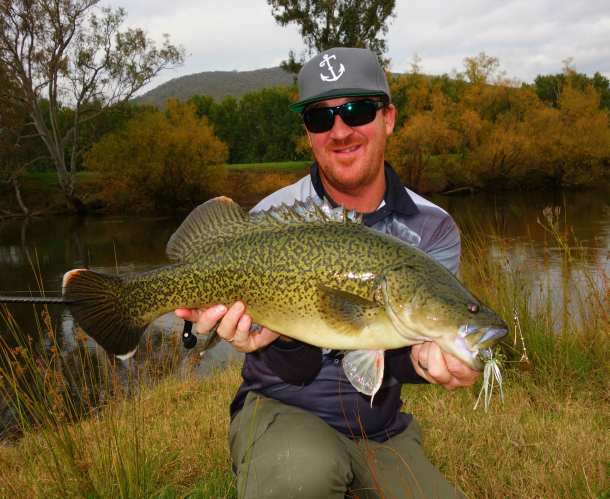