IT was at the St Georges Basin Flathead Classic while fishing with team Fisho that I ironically won the Okuma rod and reel combo that every new subscriber to Fishing World currently receives.

Fast forward a few weeks and Rod Harrison arrived at my place on the start of a travelling/shooting adventure. On top of the trailer was a new Ezy Topper fibreglass punt that needed breaking in. Cod season being a few weeks away we decided to hit Burrendong Dam and slow roll some plastics and lures up the vertical timber chasing some of the prolific golden perch the dam holds.

Space being at a premium in Harro’s rig I decided to take the new three piece Fishing World Okuma Rod and reel combo. On opening the rod tube I was pleasantly surprised at the quality of the rod and more so the Okuma reel that comes with a lifetime warranty. The rod is rated as medium action with a line rating of 4-7kg - perfect for extracting the goldens from amongst the timber.

With the Ezy Topper launched and the new Yamaha 9.9 fitted we took a run out to the nearest stand of drowned timber. Second drop with a Berkley curl tailed grub and the Okuma rod loaded up with a nice golden; the medium action rod was perfect for guiding the fish through the maze of drowned branches. This fish was followed up by its mates keen in spawning mode, so keen in fact as my mate tried to net one fish in the eco net he ended up with two!

The fish was the first of 20, with the majority of hooked fish followed up by others. The rod and reel combo was truly a great outfit, something that you might not be the case being a freebie!

The following week I was on the river with the same outfit trying for another golden perch. Carp were everywhere and I tossed the curly tailed grub at some surface cruisers and was really surprised that these cruisers that are normally very hard to tempt would take the grubs so readily. Some of the carp were 5kg or more but the Fishing World Spec rod and reel handled these fish with ease. I put nine carp on the bank that afternoon, and was getting very attached to new rod and reel.

Next outing was a carp comp and my son borrowed the FW combo and took the curly tailed grubs and had phenomenal success chasing carp on grubs - the rod and reel performed faultlessly and helped put another 16 fish on the bank!

He actually won a BCF gift voucher for his effort but traded this for a Fishing World shirt that was won by another angler who was a bit too large for the shirt!

Next outing was the Murray cod opening where the FW Combo was set up with a new style spinnerbait called a Glimmer Minnow, the main difference being the “bait“ is made up with fly tying materials and really does live up to its name.

I don’t think I'd made a dozen casts when the FW combo loaded up with a new species, a well-conditioned Murray cod, easily beaten on this medium action rod. 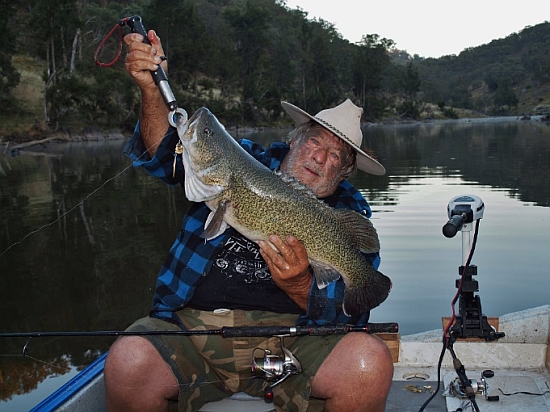 Rod Harrison with a Murray cod taken on the FW Spec Okuma outfit.

The FW combo made this trip also, being a three-piece traveller it truly is very compact.
Bobbing in the muddy water accounted for nine golden perch, four Murray cod, two freshwater catfish and close to 200 carp - the FW combo took around 60 of the carp and one of the Murray cod.

After taking close to 100 fish on the combo over the past few weeks it has performed faultlessly, the drag washers in the reel are going to get a bit of maintenance as they have been called on and punished numerous times but have given everything asked of them.

This rod a reel set up is going on annual holidays with me at Christmas. It does say on the rod that it is for snapper/inshore - let’s see.

A good rod and reel combo for subscribing to Fisho, doesn’t get much better than that!